Sebastian Coe will require courage to clean up athletics 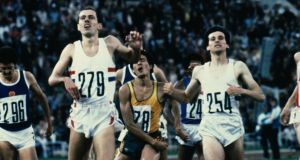 Sebastian Coe’s ascension to the IAAF presidency got me thinking about his old sparring partner Steve Ovett. Even 35 years after those titanic Moscow Olympic clashes, the names are inseparable, defining each other, as much through personality difference as athletic similarity.

Coe, as smooth off the track as on it; Ovett, the punk bruiser who’d as soon run through you as past you. On the plane back from Moscow, Coe made a point of politely agreeing to every media interview request, helping to turn himself into the golden boy of British athletics; Ovett would have preferred to jump out of the plane than do that.

That the polite middle-class boy should subsequently enjoy a career as a Tory MP before becoming a lord seems as fitting as Ovett buggering off to keep his head down in blokey Australia for the last two decades.

Ovett was the man who after winning the 1978 European 1,500 metre title was made attend a press-conference where the sum total of his contribution was to say “Merry Christmas” – in August. I know it’s childish, and hardly an expression of professional solidarity, but you have to love that blunt refusal to play the bullshit game.

Sure enough ‘googling’ Ovett yields little new about the now soon-to-be 60-year-old. Rarely has a sports figure been more dismissive of his public image. But there was one recent interview with his son, Freddy, a promising athlete himself once who has switched to a professional cycling career in France, something he appears hardly devastated by, pointing out that doping is worse in athletics than in his new sport.

“Cycling has taken more of an aggressive approach in trying to stamp it out,” Ovett Jnr is quoted as saying. “In athletics, a lot of dodgy stuff is going on that the general public are not aware of because they’re not knowledgeable enough.”

Managing to duck under the ethical limbo pole that is cycling might be a hint you’re in deep doping trouble but that’s the athletics reality, a sport which to vast swathes of the general public has long since waved bye-bye to any credibility it might once have had.

Anyone watching the current track and field World Championships who doesn’t feel nagging suspicion every time something extraordinary happens either has an agenda or is simply not paying attention.

Coe’s ability to concentrate on detail needed no greater advertisement than the London Olympics, so those pinning their hopes on the Englishman cleaning up the sport now that he’s top of the IAAF must hope his extraordinarily combative “declaration of war on my sport” reaction to the most recent doping revelations was politically calculated in order to get elected.

What that says about the constituency he’s now in charge of is interesting, although Coe can hardly present himself as some white knight, sorry, lord, riding to the rescue: he has after all been on the IAAF council since 2003 and been its vice-president since 2007. In fact, his post-running life testifies to significant skill as a political operator.

He will officially take over as president next Monday, a step he has described as the “pinnacle” of his career. Maybe his narrative will change but in recent months it has been contradictory, talking the talk about fighting cheats while holding an official line which seems to suggest blood-testing only a third of the athletes at the World Championships is okay.

Athletics quite obviously requires a radical clean-up, expensive and embarrassing as it might be, but still necessary since no one on the outside looking in can be sure in believing any of it right now.

And it’s hard not to suspect at least part of the problem is that those on the inside don’t seem to quite grasp the scale of the task the sport has in regaining credibility and that to do it fighting the doping scourge has to be the only game in town.

Maybe being on the political inside means losing sight of the big picture is inevitable. It might mean some even have a stake in blurring it. Being a political player does tend to result in it becoming about your game rather than the game. That’s the case from cabinet committee to county board and under-12’s selection panel. But it is ultimately counter-productive.

It’s hardly comparing like with like but Michael Hastings’s book – The Operators – about the US Army’s involvement in Afghanistan chillingly outlines how big-picture reality can get lost in the institutional game.

What had originally been about chasing down al-Qaeda became instead a power-play between generals and politicians, who saw themselves as operators in the arena, indulging in pissing contests costing billions of dollars and thousands of lives which changed things only by making them worse.

Nothing so serious is at stake in sport but the instinct to focus on the technical rather than the obvious is still there. It’s asking a lot for anyone to climb to the top of the greasy political pole in order to then chop it down but that is what is required if athletics is to truly get serious about doping.

Most everything we know about Coe suggests a hugely able and clever man who is at heart deeply establishment. That he’s now on top of the IAAF establishment testifies to his operating skills within it. Maybe he’s working to reform it from the inside. That could be his thinking but some of his statements are contradictory enough to make it hard to tell.

Meanwhile his old rival says nothing at all. Ovett’s famous disdain for the bullshit game though doesn’t make it difficult to imagine what he might think.