Young Munster take over at the top in Division 1A 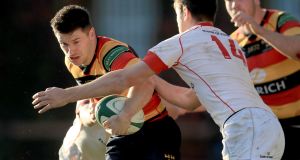 Lansdowne’s Foster Horan with Bryan Mollen of Dublin University during the Division 1A clash at College Park. Photograph: Donall Farmer/Inpho

For the third round running, there are new leaders in Division 1A after Young Munster took over top spot with a thrilling 34-32 bonus point win at St Mary’s.

Munsters capitalised on Dublin University’s loss to Lansdowne, their Munster centre Dan Goggin doing a good deal of damage against Mary’s with a first-half brace of tries.

Cork Constitution climbed into the top four courtesy of a 31-15 bonus point win over bottom side Terenure. Full-back Shane Daly crossed for his fourth try of the campaign.

Daly’s Ireland Under-20 colleague James Ryan touched down and had a starring role in UCD’s hard-earned 23-16 victory over Garryowen. Round five leaders Trinity were kept scoreless in the second half as 11 unanswered points guided Lansdowne to a 25-14 triumph at College Park. Backs Eamonn Mills and John O’Donnell notched tries either side of half-time and Scott Deasy kicked five penalties.

Buoyant Buccaneers swapped positions with UL Bohemians at the top of Division 1B after running in six tries.

The Buccs back-line cut loose at Dubarry Park, winger Jordan Conroy’s first half brace – the Tullamore youngster now has seven tries in all – helping them coast to a convincing 49-17 win.

Galwegians blew a 14-point first half lead as Ballynahinch won 30-24 at Crowley Park.

1 Tour de France: Every yellow jersey winner must feel guilty by some association
2 Kevin Babington: Learning to live again after life changed forever on Long Island
3 Matt Williams: The sky is not falling in on Irish rugby - but Ireland do need a new plan
4 Aaron Rai takes slender lead into final round of Irish Open
5 Sam Bennett: ‘A green jersey in the Tour de France is such a highlight of my career’
Real news has value SUBSCRIBE