Return of Warburton and Jenkins should strengthen visitors’ pack 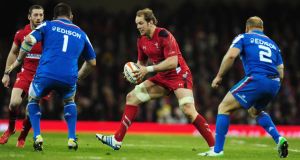 Alun Wyn Jones, who inherited the Lions captaincy for the decisive Sydney Test ahead of the injured Sam Warburton and Paul O’Connell, as well as the demoted O’Driscoll, sought to keep Saturday’s game in some sort of perspective when asked if the Welsh team can use any Aviva Stadium hostility to their advantage.

In typically blunt style, the 28-year-old lock quipped: “We’re not in Syria, so I don’t think it’s as hostile as you like to make out.”

As for this being billed as a spicy affair, Wyn Jones commented: “We’re not talking about curries are we?”

Maintaining the theme, he added: “Everybody keeps talking about spice and all this sort of stuff but we’ll wait until Saturday to see if there is any there. That’s for you guys (the journalists) to build up. As players it’s there whether it’s after a Lions tour or not.”

To underline his point, Wyn Jones referenced Wales’ hard-earned win over Italy last Saturday at the Millennium Stadium. “It wasn’t friendly against the Italians but none of them were on the Lions tour.”

Straight bat
Gatland has himself expressed a desire to move on and O’Driscoll has said “time heals all wounds” in speaking to the media before the Scottish game, and pointedly not this week. The recalled Gethin Jenkins also maintained a straight bat yesterday when asked if the Lions third Test selection could be a sub-plot to this game, retorting: “I know where you’re going and I’m not going there.”

Altogether more relevant is Gatland’s selection, with the anticipated recall of Warburton and Jenkins likely to strengthen the Welsh pack, particularly around the pitch and at the breakdown. Similarly, what Wales lose at the lineout with the loss of the hamstrung, 6’ 10” Luke Charteris, they gain in physicality and abrasiveness with the 6’ 4” Andrew Coombs, who made a strong debut against Ireland last year.

All told, their starting XV features a dozen Lions tourists from last summer and 11 Test starters, nine of whom started the third Test. This would have been ten if Jonathan Davies had been recalled, or indeed 11 if Warburton hadn’t been injured before that third Test. Uncapped Scarlets second-row Jake Ball features in a match-day squad for the first time alongside the demoted Paul James and Justin Tipuric.

“With the injury of (Seán) O’Brien, it is a big loss to them,” said Gatland. “We’ve got two very good sevens in Sam and Justin (Tipuric). We know we can move Sam over to six if we want to.

Physical game
“It is going to be a tough, physical game. In terms of people in the world stealing and poaching ball and winning penalties, Sam is definitely one of the best in world rugby. We will be looking forward to competing quite hard at the breakdown.”

“I thought Scotland started off pretty well and put them under a little bit of pressure. I thought Sean Maitland was quite a significant loss when he got injured. They (Ireland) looked pretty much in control. By all accounts they have spent the last two weeks preparing for this game on Saturday. We are aware of that, and they are two teams that won their opening game going head to head. It is a massive game for both teams.”

Gatland has also detected the stamp of Joe Schmidt on the Irish team. “It is probably a carry-on from Leinster. There are a lot of players that Leinster have used, and there is a lot of familiarity. We’ve had a look at Leinster and the way they have played. He has introduced that and he is trying to play a reasonably attacking brand of rugby.”

In an unchanged backline, full-back Leigh Halfpenny will win his 50th cap at the age of just 25, and will play alongside Alex Cuthbert and George North for a 12th straight time in the Six Nations. Wales have won all but one of their last 11 in the championship, the exception being Ireland’s win over them in the opening round in Cardiff last year.