Unrest all over, and it’s no different with our provinces 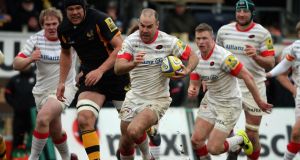 With so much unrest, globally in the Democratic People’s Republic of Korea and internationally, with the loss of Declan Kidney it’s hard to focus on our provinces. But Ireland’s head coach will have to wait till next week as all three provinces are, worryingly, on various points of their curve this weekend.

Before that I watched the Cheetahs entertain Melbourne Rebels in Bloemfontein last weekend. On 71 minutes 34 seconds Cheetahs substitute scrumhalf Petrus van Zyl put the ball into a pre-ordained eight-man attack scrum. He rolled the ball directly down channel two to number eight Phillip Van Der Walt’s feet. A massive scrum earned them a penalty that resulted in a seven-point try.

It was an extraordinary development, with New Zealand referee Glen Jackson displaying no interest. What next?

Leinster’s curve with injuries, defections and retirements is most worrying – but not because of Wasps, who threaten but are not in the same class. Leinster are strong favourites to win the Amlin Challenge Cup and favourites to beat Wasps tonight but last Saturday, sitting in the RDS, I was struck how ordinary they looked against Ulster without their stars.

Their systems, as always, were impeccable, with their half-backs running the show, their forwards very active through a constant flow of pods, carries, offloads and clear outs, but they lacked a world-class cutting edge.

Scrum hammered
The Leinster scrum was hammered twice by Ulster early on but soon recovered and went on to trade like for like with Ulster.

The secondrow combination is crucial at scrum time, and Devin Toner’s location behind his prop even more so. Quinn Roux looks physically impressive but is very short on match practice and appeared heavy on his feet and, understandably, off the pace.

Many of the stars are back but Leinster’s bench lacks impact to enhance the pace if necessary. Wasps’ back three, augmented by big bench ball-carriers such as number eight Billy Vunipola and hooker Tom Lindsay, can keep them in it, so the outcome will be based on Leinster’s 10, 12 and 13.

As we said last week, Ian Madigan loves the freedom to strike run, at times to the detriment of control.

Outside him, Gordon D’Arcy and Fergus McFadden will improve the midfield hugely on last Saturday.

Saracens, with Charlie Hodgson at 10, are a very controlled, regimented Premiership side. In many ways they are a better version of England.

Our greatest passing scrumhalf, Peter Stringer, never kicked as much in his life, when there but the danger with Saracens is being lulled into the supposed lack of creativity that we witness in Super Rugby.

Their lineout, for instance, is full of movement and statistically, is the best in Europe.

Once more Paddy Jackson is in the limelight. I fear, though, the fixture will be a bloodbath up front, with Chris Ashton or David Strettle settling it out wide, as there can be too much over and back from Ulster in multiphase, which demands that both Ulster wingers, especially Andrew Trimble, really test Saracens’ very mean defence: intriguing.

As for Saracens’ defence coach Paul Gustard and his wolves, can they put out Ulster fires?

As for Munster’s massive challenge on Sunday, there are many reasons for scepticism but then there’s the Exeter Chiefs’ home and away victory over the mighty Harlequins, most recently in the Stoop on March 2nd.

Add to that Gloucester’s defeat of Quinns last Friday. In fact, they have lost seven of their 19 Aviva Premiership encounters this season.

So Munster’s style is the key factor. We know what Quinns can do; they adore precision set-piece plays on the gainline, such as off-the-top-of-the-lineout ball to Danny Care, then a flat, accurate delivery fired out along the gainline, with Nick Evans being led by his blindside winger Tom Williams’ decoy and multiple decoys out wide to get Ugo Monye on the ball.

They are very good in the offload and they also have many options for unlocking defensive styles, with Evans at outhalf crucial. His spatial awareness and depth alterations allied to his range of kicking afford Quinns multiple options.

Be warned Munster, a rush defence will be punished with chips over the top. These are not aimless or off the cuff but team-managed opportunities, well rehearsed and devastating.

Ronan O’Gara simply doesn’t have the same array of options at his disposal. However, Conor O’Shea won’t be able to predict his opposition’s style, because Munster don’t know it either!

This is a real threat to the well-run machine that is Harlequins. Munster’s trip to Glasgow is irrelevant but team selection, especially in midfield, and Rob Penney’s tactics could be their undoing.

I have struggled to understand James Downey’s role as he has been skipped in getting the ball wide, too early. Defences are well prepared to fill the field and starve quality like Simon Zebo of space, thereby nullifying him in heavy traffic.

Quinns enjoy a solid points scored but have a very healthy points conceded (highest in the top six). Munster will score but how? Gloucester and Exeter gained most advantage when pummelling up front, controlling possession and being patient for opportunity.

Munster lack an edge in midfield and real pace outside, so must suck Quinns into a battle royal for O’Gara and Zebo to gain advantage.
liamtoland@yahoo.com

Bale and Dele Alli score as Tottenham qualify with draw in Austria 21:19
Connacht use visit of Benetton to give as many players as possible match time 20:51
Celtic surrender two goal lead in AC Milan defeat 20:16
Fans told not to excessively sing or hug as Premier League crowds return 20:02
Gillane’s chances of playing against Waterford rated ‘50-50’ 19:20
Crossword Get access to over 6,000 interactive crosswords