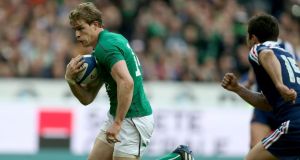 Joe Schmidt’s arrival as Ireland coach has coincided with Andrew Trimble’s most impressive period in the green jersey, but the player’s character has also played its part. Photograph: Dan Sheridan/Inpho

How to build success? As the dust settles on the Heineken Cup exits this question remains on my mind.

We’ve also been asking this of my local club Old Crescent. The answer invariably varies.

If we agree players are the key component then there’s a wee bit of preparation work.

If these questions interest you then watch the extraordinary journey Picking a Winner: The 1998 NFL Draft http://retroreport.org/picking-a-winner-the-1998-nfl-draft/

How did the Indianapolis Colts and San Diego Chargers decide between Peyton Manning and Ryan Leaf (who?) respectively? How would you?

Would it be on physical and mental capabilities, or character, or simply gut instinct?

Manning went on to become one of the biggest names in American Football while Leaf drifted away after only four years and is doing prison time.

Cyrus Mehri, the developer of the 120 question test NFL Player Assessment Test to assess the mental makeup of football prospects and identify patterns that correlate with performance on the field, notes “The best players are not necessarily the fastest players or the strongest players”.

With 100 All Blacks caps, we already know what he can do. It is, however relevant when we consider Robbie Henshaw, this year’s IRUPA Nevin Spence Young Player of the Year, and Andrew Trimble, the Players’ Player of the Year.

Trimble, like Manning and Leaf, arrived with great fanfare, winning the IRUPA Young Player of the Year in 2006. But it has taken eight seasons, which included 55 international caps and many disappointments, for him to be recognised by his peers as the best player in Irish rugby.

On the face of it, Joe Schmidt’s arrival has coincided with arguably Trimble’s most impressive period in an Ireland jersey, but the player’s character has also played its part.

The thing to establish is how the interaction of player and coach brought about this improvement, and then work out how it might be replicated throughout the country.

Unfortunately the clubs, having once fed the provinces, are now marginalised in favour of the academy syste to feed the provincial monster.

Connacht, in reshaping their elite player model, are reducing top end numbers to enhance quality, with their academy filling in the gaps.

But with the best will in the world, Connacht’s squad size will make it difficult to negotiate all fixtures.

Connacht’s academy system, under Nigel Carolan, is going from strength to strength, whereby Pat Lam will dig more regularly into this resource.

It was interesting to hear former England and Manchester United great Phil Neville reflect what had marked out the club from others in the Premier League: promoting quality youth team players to the senior ranks much quicker .

Jack Dineen, from the legendary Limerick clan, is a case in point. Just 19 and having played all his rugby in the backrow, he recently converted to hooker and found himself debuting against Munster last month.

New system
Under the new system Connacht will likely be promoting many more, and far earlier.

Should the other provincial squads shrink in line to afford quality, such as augmenting with some foreign imports while also ensuring indigenous quality stays put (Jonny Sexton) then solutions are required to back up the core 20 odd players each week.

Last week I suggested maximisation of indigenous resources. One option is to merging the academies under IRFU performance director David Nucifora, from where they can feed the teams that need them most.

New Zealand, like Ireland, have long had a culture of loyalty to their homeland sides, Auckland, Canterbury etc. The reality became obvious that many of their players were missing out due to the log jam ahead of them and simply wouldn’t countenance moving across to their “enemy” clubs.

This model was changed where players are now directed into the various franchises that need them most and which will give them quality game time.

Back to the draft system! Manning and Leaf give an insight into how players can be graded in an effort to predict successful careers but the draft system itself is one the IRFU, through Nucifora, can manage.

In the NFL draft, the teams with the worst record get the highest picks, which would punish quality vibrant and successful provincial academies but would redress any imbalance by levelling the playing field.

For instance Brian O’Driscoll could have spent a pre-ordained time in Connacht along with others coming through the system.

Connacht could of course trade him immediately for more players or a transfer fee. If that is unpalatable for the provinces or their followers, then each provincial senior squad should ring-fence their top five picks from their academies, with the remainder managed by Nucifora to maximise resources throughout the other provinces.
PS. It’s interesting that Ryan Leaf received only one vote in his junior year to become team captain. Trimble proves, character builds player & success.