Tommy Bowe and Andrew Trimble touch down in Ulster defeat 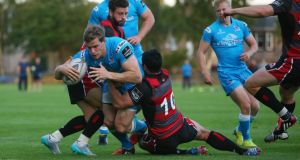 Ulster winger Andrew Trimble gets over for a try in the pre-season game against Edinburgh at Goldenacre. Photograph: Ian MacNicol/Inpho/Presseye

If try scoring is a main criterion for Ireland selection then wing contenders, Tommy Bowe and Andrew Trimble, certainly promoted their own causes last night in Ulster’s warm-up game against Edinburgh at Goldenacre.

On an immaculate pitch Bowe finished off a move which had started with a searing break by centre Stuart McCloskey which was converted into scoring potential by the alert support of fullback Craig Gilroy, another of the Ulster players trying to register on Joe Schmidt’s radar.

Trimble’s score was less spectacular but just as important, the Ulster wing managing to squeeze over after his forwards had constantly driven at the Edinburgh line from a penalty-created lineout in the corner.

Bowe played only the first half while Trimble, needing game time after picking up an injury in the international game against Scotland two weeks ago, contributed a full 80 minutes. In terms of booking a place in the Ireland squad, both wings look possibles, Bowe showing that he is still an international striker and Trimble reassuringly secure.

As for Ulster, this was the province’s second defeat in warm-up games, having lost narrowly to Leinster seven days earlier. “The result was obviously disappointing, but we gave guys game time and we had to accommodate a few Ireland players at the last moment,” said Ulster coach Neil Doak.

“We perhaps were not clinical enough when we had Edinburgh under pressure but in fairness to them they coped well with our attacks.”

Ulster certainly looked the stronger of the two sides in the opening 10 minutes when they monopolised possession, only to be met by determined Edinburgh defence. Having prevented Ulster from scoring Edinburgh took the lead with a penalty goal by scrumhalf Nathan Fowles but from the restart McCloskey made the break for Bowe’s try.

Edinburgh, however, gradually gained the better of the forward battle and after the forwards had repeatedly battered the Ulster line, replacement Magnus Bradbury crashed over from close range, Fowles adding the conversion,.

Then just before half-time Edinburgh’s new signing Otulea Katoa touched down in the corner after good back play, Fowles again converting for a 17-5 interval lead.

With subs coming and going in the second half the only try after the break was the Trimble touchdown, the other points in the match coming from Edinburgh fullback Jack Cuthbert with two penalty goals.

1 Serpentine stays on from the front to steal Epsom Derby for Aidan O’Brien
2 Monica Seles: The warrior queen who could have been the best ever
3 Love tears them apart in stunning Epsom Oaks romp
4 Eamon O’Shea: We spent quite a bit of time talking about older people rather than to them
5 Matt Williams: Six Nations must recognise the desire for revolution outside Europe
Real news has value SUBSCRIBE

Séamus Power huffs and puffs as Wolff blows the door down in Detroit 23:50
Chelsea make light work of Watford to move back up to fourth 22:18
Arsenal check Wolves to relight their European fire 19:41
Leeds move four clear as Brentford add to Wigan woes 18:07
Jamie Vardy reaches his century to get Leicester back on track 17:38
Crossword Get access to over 6,000 interactive crosswords