The real Toulouse turn up at The Sportsground and make amends

Debilitating virus ensures Connacht are no match for French opponents 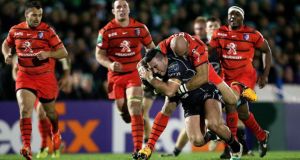 The suspicions always lurked that the real Toulouse might turn up and that, as a result, this was not the ideal week for a virus to sweep through Connacht’s ranks.

Sure enough a professional, clinical Toulouse atoned for last week’s defeat with a bonus point win to reclaim pole position in Pool Three from Saracens before those sides’ round five summit meeting.

In reverting to a seasoned, almost exclusively French line-up as they did on their last visit here two years ago, Toulouse were ruthlessly pragmatic. This was far from French or Toulousain flair, for Guy Noves’s men attacked narrowly, directly and in numbers, in another example of the Top 14 power game, with Louis Picamoles and Christopher Tolofua the chief wrecking balls.

The key selection was perhaps that of Lionel Beauxis, who used his long and varied kicking game out of hand to good effect, as well as taking all three-pointers when on offer. His exceptional restarts, with a hang time of about four seconds, also provided a profitable target for Yannick Nyanga and the chasers.

All that said and done, the debilitating virus which swept through the Connacht squad ensured they were in no fit state to host a fully loaded, focused and vengeful Toulouse.

Nathan White and Frank Murphy, who had both been named on the bench, were ruled out as was the next scrumhalf in line, Paul O’Donohoe. This meant that there was no specialist cover for Kieron Marmion, who himself had been on a drip in hospital as recently as Thursday. He was ill before the game, at half-time and immediately afterwards, yet to his credit not only played the full 80, but again did so in that sharp, error-free and composed manner of his. The lad deserves a medal.

Not the least encouraging aspect of the night from a Connacht perspective was how well their own young Academy products performed. Robbie Henshaw again showed his talent at fullback, Eoin Griffin made his presence felt in midfield and saved one try with a wonderful piece of pitch-length covering and Eoin McKeon was arguably the pick of the pack, although Jake Heenan’s tackling was once more outstanding and Craig Clarke contributed three lineout steals and reclaimed a restart.

The heavy rain and wind abated, relatively speaking, for the duration of the game, returning half an hour afterwards. Connacht had first use of the slight and diagonal wind advantage. In again showing the ambition they displayed in the Stade Eernest Wallon, they perhaps played too much rugby.

First points
This did, admittedly – after Clarke had managed a partial blockdown on Jean-Marc Doussain – yield the first points of the night through a Dan Parks penalty, although this was quickly cancelled out by Beauxis when rewarding an ominously big scrum by his pack.

In the face of Toulouse’s aggressive line speed and tackling, this generally restricted Connacht to go back and forth across the pitch before kicking, almost always into space rather than touchline. An example was the build-up to the first try, Connacht going through five phases off a lineout drive, and retreating about five metres in the process, before an unlucky turnover resulted in Yann David and Yannick Nyanga moving the ball on for Beauxis to grubber through for Maxime Medard to score.

After Clarke chased down Parks’s restart, the outhalf swept over a drop goal with a penalty advantage.

Connacht remained highly competitive until Medard’s second try on 27 minutes. This was again from a Beauxis kick, though this time a cross-kick, after Christopher Tolofua had reclaimed the outhalf’s 22 metre drop out following a failed and perhaps overly ambitious 55-metre penalty attempt by Parks.

Clearly, this was the product of homework done on the back of last week’s defeat, Beauxis finding acres of space in behind Fionn Carr – too flat in the defensive line – for the flying Medard to gather and step inside Henshaw.

Connacht kept coming. Indeed, they had much more of the play and the territory for the first half-hour. After gaining a better dividend from a well weighted Henshaw grubber into space, they eschewed a shot at goal by going to the corner.It was a curious contrast with the earlier long-range attempt, although after Brett Wilkinson was stopped short of the line by the 19-year-old Tolofua (what a talent), Parks settled for another drop goal.

However, their every mistake was punished and the killer third try came from Clarke’s inability to gather another huge, hanging restart by Beauxis.

Toulouse hammered away through 11 phases from the ensuing scrum after Yann David made inroads off a switch, Picamoles bulldozing through a couple of tackles before Tolofua plunged over the line.

Stayed in touch
Connacht stayed in touch until the surprising and fateful introduction of Ronaldson for Parks. Although it was a tactical substitution, Ronaldson didn’t appear to have warmed up completely, and the replacement outhalf extended his left hamstring with his first kick to touch.

To heap further cruelty on this blow, Leighton Hodges did not stop play, and Tolofua worked a clever move at the front of the lineout with Yannick Nyanga for Picamoles to plough through Carr’s tackle and score in the corner.

Connacht gamely went on tapping penalties and achieved a little joy through the footwork of the lively Matt Healy and Carr but a heavyweight Toulouse bench helped to soften up the Connacht defence for Gael Fickou to dance through from half-way and speed away for a fifth try.