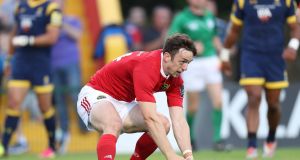 Tries from James Cronin, Simon Zebo, Darren Sweetnam and a penalty try before the interval saw Munster cruise to a convincing win over Worcester Warriors in their final pre-season warm-up.

Jean Kleyn marked his Munster debut and 23rd birthday was a storming first half for Rassie Erasmus’s side, while outhalf Tyler Bleyendaal was unerring from the tee and also kicked beautifully from hand throughout.

His replacement Ian Keatley capped a fine evening for Munster when he ran in an intercept try from his own 22. Overall it was an impressive win for the home side.

In total Munster ran in seven tries as they earned a second pre-season win ahead of next weekend’s Pro12 bow against Scarlets.

Former Munster great Donncha O’Callaghan had a difficult night on his return to Cork as his side looked sloppy a week out from their season opener against Saracens at Twickenham, although he was treated to a standing ovation from the Cork crowd when he was replaced after 48 minutes.

The four first-half tries saw Munster lead by 31-0 at the break, while Ronan O’Mahony, Cian Bohane and Keatley all got in on the act in the second period.