Schools Rugby: Big five get ready to rumble in Connacht 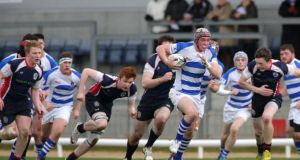 The themes surrounding the Connacht Schools Senior Cup remain the same from one year to the next. A small pool of contenders, a proven breeding ground for promising young stars, new schools emerging each year at development level allied only by an inability for these schools to sustain their progress over long periods.

The challenge is a daunting one in the west, the rapid expansion of the game in the region has surpassed all expectations, new clubs, more players, huge increases in attendances at professional level, an academy producing locally developed internationals and more schools playing the game than ever before.

Yet there’s a problem at schools level: the recession has squeezed public resources and mounted pressures on the teaching community in Ireland.

Volunteerism has suffered, most schools in Connacht rely heavily on outside help from enthusiastic rugby people in the community.

Today, the landscape hasn’t changed much. The ‘Jes’ have taken a small step back but are still a competitive senior side, Sligo Grammar are the reigning champions, Garbally College are the favourites after winning the league title in November, while Marist College remain strong after their two titles in 2012 and ’13. Only the Bish are no longer involved in the Senior Cup, competing instead in the Development Cup, while Summerhill of Sligo have made great strides.

Those are the five teams competing for the Senior Cup this year, they play in a round robin league format over the course of January and early March, with the top two contesting the final.

“The progress we are making at development level hasn’t translated just yet and we realise that this has to be a major target.” says Chris Davies, secretary of the Connacht Branch schools committee. “We’re excited by the number of new schools involved in competitions . . . but we are not losing sight of the fact that five teams in the Senior Cup just isn’t enough.”

“The cup competitions are really healthy, at Junior Cup level we have a hugely competitive eight-team competition with last year’s beaten finalist CBS Roscommon and St Joseph’s Galway among the contenders and for the first time we have an Emerging Cup which includes teams from Belmullet, Lacken Cross, Enniscrone and St Jarlath’s in Tuam.”

New schools have been emerging like never before in recent years, it started with Calasanctius Oranmore, then Rice College Westport and last year St Gerald’s of Castlebar. All three schools won the Junior Cup along the way. The translation to senior rugby wasn’t as fluid.

Sustainability is difficult even for the established schools. Seven years ago in Garbally College the boarding element of the school finished and a new plan was needed. The work in the background has been immense and after an understandable lull, they have re-emerged as a new force, working solely on the Ballinasloe hinterland.

The coaching team includes former Irish number eight Noel Mannion with former Connacht CEO Gerry Kelly as manager. In Athlone, Marist College aren’t as strong as the back-to-back title winning sides of 2012 and ‘13, but they are not letting that deter progress. A link-up with Athlone IT Sports Therapy and Rehabilitation department was established and school teams in all sports now have top quality first aid cover at games for diagnosis, treatment and injury prevention.

The story of this year’s Senior Cup could be in Sligo, however, where Summerhill College are now an undeniable force after their impressive opening round 23-6 win away to Marist College. Ross Mannion’s side could yet disrupt one or both of the big two in the race for a spot in the final and their north west derby with James Gavin’s ever-strong Sligo Grammar squad on March 4th has been pencilled in as a game not to be missed.