It could be a game for the ages. Here is everything you need to know

Ireland head coach Joe Schmidt has said that his side "need to have some belief" that they can beat New Zealand in their upcoming Rugby World Cup quarter-final in Tokyo. Video: Reuters 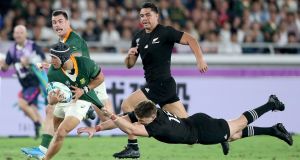 The All Blacks. Are there two more evocative, romantic, powerful words in world sport? Is there a team whose name alone can strike as much fear and awe into their opponents, before a ball has been kicked?

It’s time to meet again. On Saturday Ireland will play New Zealand for the fifth and final time in the Joe Schmidt era. It’s a Rugby World Cup quarter-final – it’s a cup final.

It is arguably the biggest game in Irish rugby history. Qualifying for a maiden semi-final by beating the back-to-back defending champions would arguably be the Irish rugby team’s finest achievement, ever.

Ireland’s tournament is yet to really catch fire. They impressed against Scotland, before being blitzed by Japan and looking cumbersome against Russia. A dominant win over Samoa has smoothed the edges and offered a glimmer of hope.

As for the All Blacks? They saw the South African challenge on the opening weekend and they met it. They have been lurking in the long grass ever since, a brooding, ominous shadow cloaking the whole competition.

On Saturday morning the two sides meet in Tokyo. The odds are against Ireland but if one group of players know how to beat New Zealand it’s this Irish side – they did it less than a year ago.

This could be the last match of the Schmidt years. It could be Johnny Sexton’s last stand. It could be a game for the ages. Here is everything you need to know, as Ireland take on the All Blacks.

Ireland against New Zealand, in the Rugby World Cup quarter-finals, at the Tokyo Stadium

The usual suspects – RTÉ 2, Eir Sport and ITV – are broadcasting the match, with all three kicking off at 7.30am for England v Australia (8.15am), before following straight into the Ireland game.

You can also follow the match via The Irish Times live blog – we’ll be covering England against the Wallabies before switching across into the main event, as soon as the first game is over (10.45am, ish).

After a summer of discontent Ireland began their RWC campaign with a bang, blowing Scotland away with a 27-3 win in Yokohama. They were brought crashing back to earth by a vibrant, fizzing Japan side a week later, their 19-12 defeat ultimately sealing their fate and leading them into Saturday’s clash with the world champions. They secured a bonus point with a 35-0 win over Russia and then thrashed Samoa 47-5 in the final round – a competent and clinical performance.

As for New Zealand, they opened their campaign with a 23-13 win over a resurgent South Africa side who were fresh off the back of winning the Rugby Championship. The Springboks flew out of the blocks in Yokohama but the Kiwis weathered the storm before going for the jugular in thrilling, incisive fashion. It was the performance of champions. They then followed up with a 63-0 win over Canada – it could have been 163-0 – before routing Namibia 71-9. That was on Sunday October 6th, and they’ve been on ice ever since – their final pool fixture against Italy was cancelled due to Storm Hagibis.

Bundee Aki’s suspension following his red card against Samoa means he’s unavailable and made life easy for Joe Schmidt when it came to selecting his midfield with Garry Ringrose and Robbie Henshaw starting.

As expected he has gone with Rob Kearney at fullback ahead of Jordan Larmour, while Keith Earls and Jacob Stockdale remain on the wings. Meanwhile, Johnny Sexton and Conor Murray will become the most capped Ireland halfback pairing.

Schmidt really only had one call to make in the pack with the front five all locked on. He has decided to go with Peter O’Mahony at blindside, with Josh van der Flier at openside and CJ Stander at number eight.

In his press conference on Thursday morning, Schmidt referenced Chris Farrell, as well as Jean Kleyn, Jordi Murphy – who is two from two against the All Blacks – and the outside backs, with Rob Kearney ahead of Jordan Larmour, as a few of those tight calls.

Guess who’s back, back again? Brodie’s back, tell a friend. There aren’t many players who would make a New Zealand World Cup squad while injured, but Brodie Retallick did. He dislocated his shoulder against the Springboks in July but Steve Hansen waited for his man and he’s back to renew his peerless partnership with Sam Whitelock. Not many coaches would decide to shift the world’s best outhalf to fullback but that’s what Hansen has done with Beauden Barrett and it’s been a success thus far, with Richie Mo’unga proving a fine presence at number 10 and off the tee.

Ireland’s record against New Zealand – played 31, lost 28, won two and drawn one – makes for pretty grisly reading. But, remember – those two victories have come in the past three years.

The heroes of Soldier Field

Remember Chicago? Remember the buzz? Remember Ireland making history by beating the unbeatable? That 40-29 victory at Soldier Field will live on forever, as an inspired Ireland lifted a monkey off their back, which had been clinging on to them forever. New Zealand’s retribution was swift and brutal – they won 21-9 in Dublin two weeks later – but that victory proved the All Blacks are mortal, and paved the way for what followed.

Tadhg Furlong, Ireland’s tighthead prop, has played the All Blacks six times – three in a green jersey three times as a Lion. He has won three Tests, drawn one and lost two. He’s an All Blacks beater – those jet black strips don’t faze him like they do others. Unburdened by history and without fear, he will be key on Saturday morning.

Joe Schmidt’s golden Ireland tenure comes to an end after the World Cup – so Saturday could quite easily be his last game in charge. Ireland have met the All Blacks four times under his stewardship, and have won two, lost two. Win or lose, a match against New Zealand is a fitting end.

Gordon D’Arcy never beat the All Blacks – but he came agonisingly close. And in his column this week he gives the blueprint on how Ireland can scale their Everest – by starving the beast.

“How can it be done? Simple. You frustrate them to the point of error. Every man has his breaking point. If the whistle of Nigel Owens – one of several leading males in the epic tale that is about to unfold – shrills on 80 minutes with big fat zeros beside the names of Beauden Barrett and Ardie Savea when it comes to offloading and line breaks then victory will belong to Ireland.This is possible.

“We have done this to them before. Visualise it happening again. Barrett had 26 carries for 49 metres, beating eight defenders, in the 2018 game at the Aviva. Such numbers cannot be allowed to reoccur.

“I remember 2013 like it was last week. The agony of that loss will never fade but I know the hurt fuelled the boys who carried the torch to Chicago. I could feel how that victory brought our national rugby team to the majestic heights of last November’s titanic win in Dublin.”

November 17th 2018. Jacob Stockdale kicks ahead, burns up the left and touches down. The Lansdowne Road roar shakes a whole city – Ireland beat the All Blacks 16-9. Another moment of magic is required this weekend.

Nigel Owens is in charge on Saturday morning, a welcome appointment for both sides. Gerry Thornley has profiled the Welsh referee, which you can read here.

Storm Hagibis has passed, but there’s rain forecast on Saturday morning – anything to make life more difficult for the Kiwis.

We’ve beaten them before, we’ll beat them again. . .