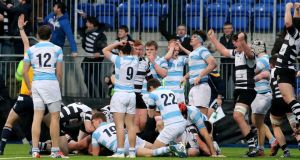 “We have to beat them once,” roared the elderly father (or grandfather), his thick country accent rising into the Donnybrook rafters as, this time, finally, Roscrea refuse to be held to ransom by the pillars of history and tradition.

“Right lads, last throw of the dice – all together now!”

He’s gone hoarse. His nerves, and those of all around him, are shot.

But, clearly, form is irrelevant this season.

And so, to the moment rugby folk associated with Cistercians College in Roscrea will never forget. Nor should they.

Entrenching themselves close to Blackrock’s try line, they batter away with herculean performances from number eight Dan Trayers and prop Dylan Murphy. The others, well drilled to a man, follow in behind.

Thrice they crank the lineout maul into gear. Twice Blackrock repel them but when Hugo Kean makes the ultimate sacrifice – blatantly killing the ball in the hope that referee Seán Gallagher won’t sin-bin the team captain - the scales shift away from history and tradition.

Gallagher has had an honest game. He knows what he saw. Kean walks.

Those up from the Tipperary border town, which rubs off Offaly and Laois, roundly agree with the yellow card as Tim Foley, Roscrea’s multi-talented centre, nudges the ball into touch again.

Foley has missed four kicks at goal. None were easy but he will never forgive himself for such uncharacteristic inaccuracy should they lose.

That, in truth, is what has Blackrock clinging to this 14-10 lead, constructed by Gavin Mullin (son of Brendan) galloping clear on 31 minutes. A fit again James McGowan added the extras and at this juncture Blackrock are living up to their regal reputation.

What a try it was. A team littered with fourth and fifth years, under-16 Patrick Patterson raced clear before offloading to the best player on the field. That Blackrock flanker Roghan McMahon can lay claim to this title is some achievement (his phenomenal performance can only be compared to Richie McCaw). On McMahon carried ‘Rock’s flowing attack with Kyle Dixon rewarding Mullin’s sumptuous running line with a beautifully disguised pass.

Such pace and precision, leading 14-5 at half-time, Peter Smyth’s charges look nailed on for a 69th title.

Foley couldn’t find his range with that or three more shots off the kicking tee.

Keane, superb throughout, battered over to level matters on 15 minutes before McGowan eased them in front with the conversion.

But the game swayed on little moments. Trayers was rampant throughout, stopping Rock’s most dangerous attacker Steven Kilgallen with a ferocious tackle, while Murphy and Rob Wharton were rattling bones everywhere they went. They tracked the pristine surface like hunters possessed by the scent of a wounded animal.

Blackrock lock Dan Mullane was forced ashore with what looked concussion but the real damage came when Conor Dean’s shoulder denied the brilliant outhalf an arena made for his skills. The champions never recovered from the loss of Paul Dean’s son.

They did survive the sin-binning of McMahon, for a tip tackle, and even opened a decent lead.

Things changed with Alan Tynan’s sensational contribution in the 48th minute. The Roscrea outhalf launched the ball into the heavens, McGowan fumbled, Tynan gathered and took off. Kilgallen caught him but was fended away as Roscrea’s 10 slammed the ball down in the right corner.

Foley missed the conversation to ensure that another try was needed.

Next, Tynan heroically leapt over Leinster backrow Caelan Doris. That confirmed the momentum shift as Blackrock slipped into survival mode; the Roscrea people sensed the chance, the once in a lifetime chance.

The monstrous teenagers on the field, however, are unaware of history, they just knew they have the south Dublin boys’ number.

Gallagher is in position to award the try as Murphy climbs to his feet with the ball. Coach Pieter Swanepoel discovers that time is up. He tells his players as Foley, of course, puts the conversion square between the posts. Down comes the curtain.

Power prevailed with Smyth, Blackrock’s coach, giving the victors their due: “Better team won. It had to end sometime,” he says of an unbeaten run stretching back to 2012.

You lose the same way you win. Blackrock will come again but there’s no reason why 2015 can’t be the year Roscrea etches their name into these history books. It’s long overdue.

“I played and lost here to Brendan Mullin’s Blackrock team in 1982,” says one of many teary eyed pitch invaders. “We had never beaten them. Until now!

“That’s why it means so much.”

Solskjær disappointed United ‘didn’t pounce’ on injury-hit Liverpool 19:59
Alisson denies Man United as Liverpool go four without a win 18:49
Mesut Özil confirms Arsenal exit as he moves to Fenerbahce 17:37
Here is your handy guide to sport on television this week 17:01
Dreal Deal steps up again at Punchestown despite alarming drift in price 16:37
Crossword Get access to over 6,000 interactive crosswords