Rio 2016: Fans fail to flock in as rugby returns to Games 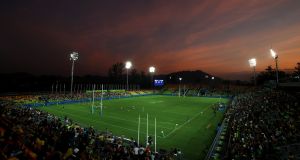 A general view of the Deodoro Stadium during the Women’s Pool C rugby match between Canada and Brazil. Photograph: Mark Kolbe/Getty Images

After an interval of 92 years rugby made a low-key return to the Olympics with the start of the women’s sevens tournament in front of sparse but enthusiastic crowds on Saturday.

In truth this was a debut both for both the Sevens format and women’s rugby at the Games. Until the sport was excluded after the 1924 Games it had only been men’s XVs disputing gold with the USA of all countries dominating with two Olympic titles.

International Olympic Committee (IOC) president Thomas Bach, fresh from the success of Friday night’s successful opening ceremony, was on hand to personally welcome the oval ball back, showing up for the day’s early matches. But he must have been disappointed that so few other fans made the effort.

The queues to get into the Deodoro complex were nowhere near as long as those reported at some other venues where delays forced an apology from the IOC and local organisers after the wait to clear security meant some spectators missed events they had bought tickets for.

But then as swathes of empty seats testified, too few fans had undertaken the long trek from the centre of Rio to this tidy army base surrounded by mountains far from the city’s picture postcard sights.

The ticket office at the entrance was open for business with seats available for all the day’s competitions at the venue but there were few takers.

That might reflect the fact it is hard to interest the average Brazilian sports fan in much beyond football and at a push motorsport and volleyball.

But if the Olympics is in part about stimulating interest in under-appreciated codes then organisers appear to have missed a trick with what is for many locals their relatively expensive ticketing policy at a time when the country is experiencing its worst recession in decades.

Sharing her train home with small clusters of fans heading to Deodoro, local resident Marci Ribeiro said she would have loved to take her two young sons to see some of the Olympics being staged in her home city.

“Any sport would have been fine. We wouldn’t have minded. But the prices are not for families like ours,” she said.

All this is a double pity as interest in rugby has been on the increase in Brazil in recent years with the country’s men’s XV now able to attract a crowd measured in five figures, an unimaginable number just a few short years ago.

Unfortunately the country’s women’s Sevens side, who qualified automatically as hosts, were unable to make much of an impact in their first two games here. They managed a penalty while going down to Britain 29-3 in their noon match but were thumped 38-0 at dusk by a relentless Canada who were comfortable with their role of party poopers in front of a partisan crowd. Brazil still have a chance of qualifying as one of the two best third-place losers should they beat Japan on Sunday but their fate is now out of their own hands.

In truth yesterday’s action was little more than an appetiser. There were too many lopsided games between the top seeds and underdogs.

This situation was exacerbated by the decision of African champions South Africa not to participate, because the country’s Olympic committee believes continental titles do not merit qualification for the Games, forcing their women’s Sevens team to give up its ticket after they came 12th out of 13 teams in the World Sevens Series.

Their replacements, Kenya, were thrashed by New Zealand (52-0) and later France (40-7). Japan, Colombia and Spain also went down to heavy defeats in their first two games. But there was an upset of sorts when in their first game Fiji beat the USA 12-7 to the delight of the neutrals in the stands.

The crowd again willed them on in their evening tie but the Pacific Islanders presented few problems for a formidable Australia while the USA got back on track by mercilessly taking apart the hapless Colombians 48-0, provoking the odd boo as they ran in their last try.

The final group matches between the already qualified seeds on Sunday should add more intrigue while the medal games on Monday will hopefully see more fans joining the enthusiastic band on hand to witness rugby’s Olympic return.