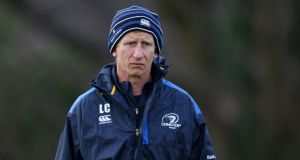 Leinster forwards coach Leo Cullen: “I’m concerned about preparing a team to go down and play in Thomond Park and we know it is a very difficult place to go to.”Photo: Cathal Noonan/Inpho

It might have only been his first six words but they did convey a sense that Leinster forwards coach Leo Cullen did not know quite what sort of a deck he had to shuffle with this week.

With Munster and Thomond Park on the horizon and a festive Irish camp congregating in Carton House, there will be a number of frontline players missing for one of the derby matches of the season.

Cullen has been on both sides of the equation before as a Leinster and Irish secondrow, but although the match is just a matter of days away, coach Matt O’Connor and the rest of the staff appear perplexed as to who is going to turn up to play.

Are you missing all the key international players?

“The lads are obviously out in camp, which is slightly unusual for a week of a Leinster-Munster game. We will get more of a report back from what’s going on out there later today, this evening, and see what bodies are back in the mix. It’s very much a national call.”

How the fans will react to two sides possibly denuded of their international players remains to be seen, with the Munster website saying that less than 2,000 tickets are now available.

That is not a road the former lock wants to go down and, to be fair to Cullen and O’Connor, they are the ones suffering at the pointy end of this debate.

Christmas spirit and goodwill doubtlessly pervade Limerick, but fans would have watched as rugby cleaned up in the RTÉ awards at the weekend and may want a little taste of the high end. They will want some bang for their buck. Perish the thought that Manager of the Year Schmidt could be conceived as a Christmas Grinch.

“It’s a very difficult question because it’s not really for me to say what happens at national level,” says Cullen.

“I’m concerned about preparing a team to go down and play in Thomond Park and we know it is a very difficult place to go to. They will challenge you physically down there for that – maybe it’s overused a bit – physical battle.

Flanker Shane Jennings was hesitant to discuss the merits of Connacht’s Kieron Marmion at scrumhalf last week compared to the threat of Munster’s Connor Murray this week because he doesn’t think Murray will be at nine. But, as Cullen points out, there is an upside to it because it’s not Glasgow or Ospreys Leinster must visit. It will at least be a contest between like and like.

From there it’s a matter of managing the players through Christmas. It’s no difficulty for footballers and jockeys who have busy days just after Christmas year in year out, but for some of the younger Leinster players, it will be a first taste of what discipline over the period actually means.

“Guys coming back in will have a bit of prep tomorrow. That will be light, and on Christmas Eve too, so it doesn’t give you that much scope,” he says.

“Players will head off to their families Christmas Eve afternoon and be off Christmas Day. We usually do a team run the day before but we are just shifting that a day forward. It’ll be quiet for most guys.”

“Listen, eating a lot of food on one given day is not the end of the world for a rugby player because he is generally going to be burning about 6,000 calories the following day. Turkey, ham, potatoes, Brussels sprouts, they’re not the worst things to be eating.”

On the injury front, Fergus McFadden was with the national team and Leinster were unsure about the status of his thumb injury, while Kevin McLaughlin will have a scan on his injured shoulder.