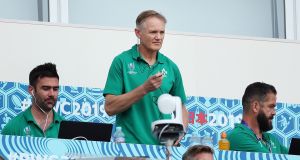 Damaging definitely, but necessarily disastrous. In the light of Ireland’s 19-12 defeat by an inspired Japan, they’ve slipped to second in Pool A, but two bonus point wins in their remaining group games against Russia and Samoa would secure a place in the World Cup quarter-finals.

That would take Ireland to 16 points, and by dint of keeping them pointless last week, the most Scotland could accumulate is 15. Granted, Ireland need bonus point victories in both games to ensure they are safely in the last eight. Failure to do so could result in them nervously watching the pool finale between Japan and Scotland.

But if Scotland, Japan and Ireland all beat Samoa with bonus points - admittedly not a given – Japan and Scotland would be fighting for qualification in their group finale. In that scenario, a Japanese win would almost certainly consign Ireland to a quarter-final against New Zealand, whereas a Scottish win would most probably mean a quarter-final against South Africa, unless Italy surprise the Springboks.

In hindsight therefore, Keith Earls’ ability to chase down Kenki Lemeki in the game’s penultimate play, and Joey Carbery’s decision to kick the ball dead, could yet prove very significant.

“Yeah, potentially the bonus point could be really important. It means that we’ve got six points from our two pool games so far, Japan have got nine and Samoa have got five. So they’re the ones who’ve got points so far and you’ve got to finish in the top two.

“So, keeping that bonus point allowed us to stay in front of Samoa in the short-term and we know that Scotland will be a player and Russia will line us up in five days’ time.

“As I said, those tight turnarounds are pretty tough going and we will, I suppose, have to chase a little bit now because we want to stay within a chance of topping the pool. Certainly we’ve got to get in the top two.”

In all the analysis of Ireland’s defeat by the hosts, it has to be acknowledged that Japan played superbly. Increasingly inspired by the occasion, their ambition and levels of skill and energy were better than Ireland’s and made them deserving winners. Their winning try by Fukuoka, supposedly an injury doubt until a late call-up to the bench, was a beauty.

“Firstly, I’d like to congratulate the Japanese for the energy, the intensity and the skill-level they brought to tonight’s game. They are a big team, they play big and they were very difficult to contain,” admitted Schmidt.

“I felt we probably controlled the first quarter pretty well, went 12-3 up with two tries scored and, you know, it’s probably exactly what we asked for. But the longer the game went on the more oxygen they got from penalties and from the skill they showed. And, you’ve got to commend them for that.

“It’s not the first time we’ve seen them do it, it’s not a surprise to us that they were incredibly tough to beat and the quality of Michael Leitch coming off the bench - he really added value as well when he came on, Yu Tamura and (Timothy) Lafaele got an arm-chair ride.

“We got penalised for a few offsides and then we became hesitant. Once we became hesitant we couldn’t really put the same pressure on them as they were putting on us. They got a real roll on, so it’s a tough defeat for us to take.

“I think the strength of the team will be how they respond and rebound from this. A six-day turnaround into this game was a little tough and we’ve got a five-day turnaround now into Russia in Kobe on Thursday. That will be another challenge for us.

“From an injury perspective, Rob Kearney – I just spoke to him in the corridor - he’s got a decent shiner but he’s feeling okay now. He failed his HIA as far as I know, so if he doesn’t pass HIA 2 and HIA 3 he will confirmed concussion and that will rule him out of the Russia game.

“Jack Conan, unfortunately, has a fracture in his foot and he will return home to Ireland tomorrow,” Schmidt confirmed, with Jordi Murphy set to be called up as replacement.

Playing in a stadium which was akin to a sauna after a six-day turnaround, Ireland’s energy levels dipped, their set-piece cracked, they struggled in the collisions, missed tackles and their normal accuracy at the breakdown deserted them, while they increasingly kicked too loosely in the second-half.

But even in hindsight Schmidt did not appear to regret retaining 11 of the starting XV from the win over Scotland, including the entire pack.

“Em, it’s hard to say. I think the players, like CJ and James Ryan, they were still delivering at the end. I think we tried to have a very easy start to the week. We had a light training on Tuesday and our real full training was on Thursday, so those players felt really well recovered and because we had a few changes in the backline, we wanted to keep a little bit of continuity up front, and that was the decision we made.

“I think hindsight is always an advantage but I’m not sure we would have done it too differently.”

Schmidt also refuted the notion that in making seven offloads and plenty with more width than they had done against Scotland, they had employed the wrong tactics against opponents who like it played fast and furious.

“No, we didn’t go out with an explicit idea of playing any differently from the way we normally play. The way we started the game is the way we play the game. And I felt we got good line breaks, got in behind them and scored two tries.

“Unfortunately, that reversed as soon as they got hold of the ball and we missed a couple of marks. I think we got two lineouts in the second-half; we didn’t get too many platforms to play from and they kept the ball for very long periods.”

Privately, Schmidt and the Irish camp will have more grievances about the performance of Angus Gardner than they let on here, the Irish head coach having recalled perceived injustices from the last time the Australian refereed Ireland, against Wales in March, two days before this game. One ventures Gardner may well have noticed.

Gardner and his officials were harsher on Ireland in applying the offside line and particularly so at the breakdown, where Japan had plenty of reward from holding Irish players down, going past the ball, coming up the side of rucks and, on one clear occasion early on when Amanaki Mafi won a turnover when coming in from the side.

Asked if the 9-6 penalty count against Ireland was unfair, Schmidt said: “We’ll go back and have a look at it. I certainly understand the frustrations of some of the players and in discussing things with them based on what I saw on the monitor, it’s not too dissimilar from the last time we had this referee. We’ll go back through the official channels and make our comments to the refereeing body.

But all that aside, Schmidt admitted that failing to add to two first quarter tries in the last hour of the game was “incredibly disappointing.

“To put ourselves in a couple of positions where we felt that we were close enough and putting real pressure on and we got quite close and then didn’t actually capitalise. We turned one over in the second half where it was very hard for us to get the ball placement.

“We were on top of the tackler and I thought that pretty tough but you’ve got to be tough enough to cope with these things and certainly, we’ve got to be better at what we’re doing and we’ve got to demonstrate that in five days’ time, (although) we’re not going to get a lot of time to put anything together.

“I think we’re doing an open session in Kobe on Tuesday and that will be the only training we have in the lead-up to Russia, who have already proved themselves to be very physical, very combative, very competitive.

“They stayed in the game a long time with the Japanese and that’s a measure of how competitive they can be and even in the Samoa game, while they lost that game, they actually had a lot of the game, a lot of the ball, and put Samoa under a lot of pressure so we’re anticipating another really tough game in five days’ time and we’re going to have to dust ourselves off and certainly perform better than we did here.”

1 Six Nations: Ireland are contenders but England still the team to beat
2 Owen Doyle: Creeping professionalism of schools rugby a threat to the game
3 Mike Catt hopes to have Irish backs purring in Six Nations
4 In Donegal Michael Murphy is seen, simply, as a godsend
5 Nick Kyrgios sets up Rafael Nadal showdown after five-set thriller
Real news has value SUBSCRIBE