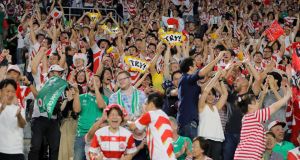 When he grows up, Donal Grace will probably not remember the time he attended a famous Japanese rugby victory in Fukuroi. He won’t recall his two weeks of being a mini-celebrity in Japan either, a status conferred on him by a combination of babyhood and bright red hair, an exotic thing in these parts.

But after a red-letter day for the local team, he must have been in danger of adoption as a lucky mascot by the home supporters. In its various shades, red was also the colour they were painting Fukuroi and surrounding areas on Saturday night, a task in which they were getting ample support from the fans in green.

Being only nine months old, Donal was not able to contribute much to that. As Joe Schmidt set about recalibrating Ireland’s path through the Rugby World Cup, however, the baby was also in his own way a good example of how people’s plans always need to be flexible.

When Donal’s parents Micheál and Gráinne, along with her sister and his brother, first thought of making a trip to the World Cup 20 months ago, they didn’t know they would have him for company. Extensive as the package they booked was – it involved tickets to all four of Ireland’s group games – a baby was not part of it.

Stand up for the Japanese. Irish fans giving credit where it’s due. #JAPvIRE pic.twitter.com/nyc4zyMsU1

But one ended up making the trip anyway, and then dominating it. Since then, for various reasons, the group had since decided to go home earlier that first planned. The Japan result didn’t change this, although a few other Irish might now be tempted to bail out too.

When not busy being a solicitor, by the way, Micheál Grace is a noted hammer thrower. And if he had left one of his hammers lying around Ecopa stadium on Saturday, the Japanese would probably have thrown it at Ireland, eventually. As it was, they threw everything else they had, including the kitchen sink. Cheered by raucous supporters, they fully deserved the 19-12 win.

If you can’t beat them, join them, decided the Irish supporters afterwards. What had already been one of the friendliest meetings of rival supporters anywhere, with a mass exchange of shirts, scarves, selfies, and the odd address before the game, became if anything more so in the wake of the result. Nobody in green could sincerely begrudge Japan the victory. They didn’t even try.

Some might say that Irish supporters of all codes take defeat only too well, as Roy Keane once did in the context of football. But the venue here was called Fukuroi, which seemed significant. So as night fell on the city, the visitors positively revelled in their downfall, while sharing Japan’s glory.

Within minutes of the game ending, this had been transformed into “Stand up for the Japanese”, a tribute accepted with modest amusement by the home supporters, safe as they were in the knowledge that their team were top of the group and had proven they stand up for themselves.