Leinster too strong for Ulster, but will they be too loose for Toulouse? 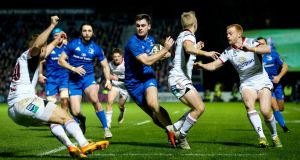 Conor O’Brien runs in a try for Leinster in their Guinness PRO14 match against Ulster at the RDS, Dublin on Saturday. Photograph: Tommy Dickson/Inpho

The post-match inquisition was brief and perfunctory. Next week’s Champions Cup game against Toulouse at the RDS was greater in the thoughts of Leinster head coach Leo Cullen, although there was one point of reference that offered a link between the two games.

Cullen explained: “You think back to the [Toulouse] game. We started slowly and got ourselves into trouble but then managed our way back into the game really well. At the start of the second-half, we looked like the stronger team at that stage but then throw an intercept pass.

“That’s what they thrive off, the looseness, the unstructured scenarios where it looks like there is nothing on and suddenly they go the length of the field in many different ways with some of the very skilful players that they have and the off-loading forwards. They can create something out of nothing.

“That’s probably the worrying thing about tonight, the start of the second-half especially. We were just too loose. If we’re like that next week, we are just going to get punished badly.”

Different personnel next Saturday but the general tenet is applicable.

“Toulouse were the team that we always wanted to be like,” Cullen admitted, recalling watching the French side beat Cardiff in the 1995 European Cup final while a fifth-year schoolboy in Blackrock.

“I remember all those players that played for Toulouse, the big, powerful forwards that were rampaging around the place and dominating set piece, scrum, maul, the exciting parts of the game,” he smiled before adding, “but then they had some exciting backs as well that tagged on a few tries.”

Pausing briefly to analyse the Ulster win, Cullen was happy with the first 20 minutes, less enamoured with the third quarter and, in an overview, admitted: “We didn’t get punished, we got away with a few things.”

Leinster have more depth of quality to their squad than Ulster at the moment and that was reflected on the pitch and the scoreboard.

In the first quarter of the match Leinster were running at virtually a point a minute and the portents were ominous for the visitors, but a number of factors prevented an annihilation on the scoreboard. The character shown by a young Ulster side was commendable in the circumstances: beaten, battered and bruised, they never stopped trying.

The visitors scrambled hard in defence – Greg Jones in particular, Alan O’Connor, Nick Timoney, Matthew Dalton, Darren Cave and James Hume stood out – in trying to cauterise the flow of line breaks as the home side dominated the collisions, but also benefitted from Leinster’s slightly distracted and careless performance in the third quarter.

The final 20 minutes of the match was basically an exercise in wondering when referee Andrew Brace would award a penalty try to reflect Leinster’s scrum dominance. He eventually did in injury time but had equal cause to run under the posts, seconds before Leinster scrumhalf Jamison Gibson-Park dotted down for his side’s fifth try.

It amounted to window dressing in terms of the final score-line, as Leinster had secured a four-try bonus point by the interval, hooker Sean Cronin grabbing a brace in the home side’s purple period, the first 20 minutes of the match. Leinster played with pace and width, were precise in their handling and intelligent in exploiting space often on the fringes or through the centre of rucks.

Conor O’Brien, a deserved recipient of the man-of-the-match accolade, tagged on a third and Andrew Porter a fourth in first-half injury time. Leinster’s pack excelled to a man but Max Deegan’s handling, athleticism and link play is worthy of special mention; the all-St Michael’s backrow was impressive as a unit, Josh Murphy punishing in his tackling and teenager Scott Penny a ball of energy.

Rob Kearney and Jack McGrath proved their rude health following injury ahead of next weekend’s Champions Cup game against Toulouse; so too Barry Daly, while Ciaran Frawley was largely assured, a couple of errant line-kicks aside.

Hume was outstanding in adversity for Ulster and the one player who looked genuinely capable of causing Leinster some discomfort with his strength, pace and footwork. There are raw edges but the potential is obvious.

The legacy for Ulster was even more painful than the defeat, with Kyle McCall suffering a nasty-looking leg injury while the gifted Michael Lowry failed a Head Injury Assessment (HIA) after colliding with Daly in the first half.

Ulster coach Dan McFarland said that he was “hopeful” that Jacob Stockdale would be fit for next weekend’s Champions Cup clash with Racing 92 in Belfast. The game is likely to be a sell-out. Having rested most of his frontline players, McFarland will be hoping to see the net benefit come next Saturday afternoon.

1 Munster beat Glasgow to keep their winning streak going
2 The Offload: Ireland are stuck in no man’s land
3 Mickey Harte is the new Louth football manager
4 Blunt Ireland’s lack of variety fails to penetrate England defence
5 How a visit from his barber helped Kyle Sinckler get back to his best
Real news has value SUBSCRIBE

New Killarney athletic track another jewel in the Kingdom’s crown 01:00
Munster beat Glasgow to keep their winning streak going 22:31
Solskjaer says United must be fully focused to avenge Istanbul defeat 22:30
Southampton and Wolves share the spoils at Molineux 22:20
How a visit from his barber helped Kyle Sinckler get back to his best 22:05
Here is your handy guide to sport on television this week