Ireland ready to get down and dirty with wily Argentinians 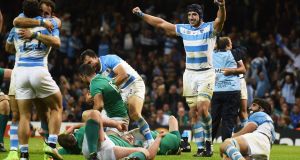 The South African game, á la Chicago a year ago, set the tone for a memorable November, but akin to the finale against Australia, in many ways this final game – Ireland’s last until their Six Nations opener in Paris – leaves the longer aftertaste. Ireland, players as much as fans, expect a 3-0 series and a seventh straight win.

Revenge for the 2015 World Cup quarter-final defeat is comparatively smaller beer, partly because it could never be adequate compensation. It was the same when Ireland registered November wins in the cycles after the 1999 and 2007 World Cup defeats.

Ireland retain five of their 2015 line-up, and one replacement, while Argentina retain seven starters. Rory Best is the sole survivor from the 2007 game in Paris, when Argentina’s 30-15 victory put Ireland out of their misery.

“That World Cup will certainly be in the top three in terms of most disappointing moments in my career,” said Best, recalling how they had been two minutes away from beating France at home in the preceding Six Nations and a potential Grand Slam before “stuttering” into the World Cup.

“Even the Georgia game, I am pretty sure they scored right at the death to potentially win the game even though it was ruled that he was held up. Nothing clicked for us in that tournament and by the time it got to the Argentina game, there was almost a feeling around the camp, and I will never forget it, that people just wanted to go home. They had had enough.

“We obviously went out there knowing we needed a performance of a lifetime to beat them and everyone was just fed up. I don’t think I’ve ever been in a squad like that since.

“Argentina, to be fair to them, in that World Cup surprised a lot of people. They were phenomenal, right from the first game when they beat France.”

The former Leinster man Felipe Contepomi and some of his old Munster buddies are no longer around. Thus, akin to the Roy Keane-Patrick Vieira infused Manchester United-Arsenal rivalry, some of the edge has been diluted. Los Pumas have also moved on from the mix of mauling, scrummaging and one-off runners which frequently dragged Irish teams, like so many others, into arm wrestles.

Alas, the game will not feature a farewell appearance in this country for the injured Juan Martin Hernandez, aka “El Mago”. Ireland are also without his nearest equivalent, Simon Zebo, as well as the flair of Keith Earls and three front-line centres. Hence, this latest meeting might not scale the enterprising heights of Ireland’s 46-24 win on Argentina’s last visit here five years ago, nor los Pumas’s 43-20 quarter-final win just under two years ago.

For starters, it could be doing this Irish backline an injustice to suggest there have been predecessors with more apparent flair but, at any rate, with just five caps among the three-quarter line and new combinations in midfield and in the back three, it is at the very least unproven.

Nor, without overseas players like Juan Imhoff, scorer of two tries that day, do Argentina have the same cutting edge, even though they retain fullback Joaquín Tuculet as well as their outstanding halves, Martin Landajo and Nicolas Sanchez, and have unearthed a few new gems such as the 6ft 4in goal-kicking winger, Emiliano Boffelli, whom the debutant Adam Byrne will be opposing.

Los Pumas have shown a facility for keeping the ball, eventually grinding England down for their sole consolation try at Twickenham through 30 phases and almost four minutes.

However, akin to South Africa here, Argentina struggled to adapt to the new law interpretations at the breakdown. They recycled the ball repeatedly against England, but by committing four men to rucks where England often had only one or none, meaning they were repeatedly running into brick walls. In that 21-8 defeat, they also left 11 eminently kickable points behind at Twickenham.

But, akin also to South Africa when beating France last weekend, there were clear signs that Argentina had adapted better when beating Italy last Saturday, albeit two of their tries were more about wearing down the Azzurri defence than piercing it.

That said, another pattern in their winless Rugby Championship was how they faded away but in the last dozen minutes against England and Italy, they scored three tries and conceded none.

Against England, they played the 6ft 5in Marcos Kremer, a sometime lock, in the backrow, as they went for all out size, and retained him there both last week and today. But, in the battle up front, it is the quality of the Irish pack which should swing the game Ireland’s way. Ireland have an excellent scrum, and few officiate the scrum better than Mathieu Raynal, a fine referee all round.

The athletic James Ryan makes his full debut, and with Peter O’Mahony there, the Irish line-out can cope until the arrival of Devin Toner. And then there’s the all-Lions middle five in the backrow and halfbacks.

Tellingly, Sexton has a 4-0 record against the Pumas, scoring 60 points, and Ireland have also won all seven meetings in Dublin.

1 No further players to be called up to Ireland squad to face Georgia
2 Gerry Thornley: Ireland don’t want to box themselves into a corner
3 Kevin McStay: Maybe a knockout All-Ireland Championship is the long-term solution?
4 Former France and Stade Francais winger Dominici has died aged 48
5 Munster beat Glasgow to keep their winning streak going
Real news has value SUBSCRIBE