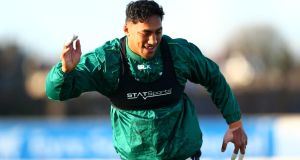 Connacht coach Andy Friend says he was unable to recall Jack Carty and Bundee Aki to solve their injury crisis, but he thinks Connacht will see the benefits of the break afforded to the Ireland duo in the coming weeks.

Irish Rugby’s player welfare plan dictated that players who were part of the World Cup squad had to take two consecutive games off over Christmas, and despite struggling to make up the numbers at training on Tuesday the province did not seek an early return for Carty and Aki.

While both players will be back next week to face Toulouse in the Champions Cup, Friend says he is keen to give them time to rest up after a hectic few months.

“No we can’t change that, we needed to give those two men two consecutive weeks,” said Friend.

“And I’m actually really pleased we did, because it’s only when they get away they realise how tired and fatigued they were.

“I got a message from Jack Carty yesterday saying ‘I didn’t realise how fatigued I was’ and he has been really grateful for the time off, as will Bundee be as well. We’ve got a duty of care to those men as well, we want to win football games, but we have to make sure we are protecting them from themselves more so.

“There has been four occasions this year where we have said to a player that we want them to have a week off and they say they’re fine. The next day they have either come in or not come in with an ailment or cold that means they can’t train for the week anyway.

“It’s only when you stop that you mentally switch off, knowing they are going to rest and then the illness comes. We have a chunk of blokes in that situation.”

Connacht trained at the Sportsground this morning with 28 players, including six academy players and another two more players called in to bulk up the attendance.

In total they have 17 players sidelined this week, as they prepare to face Leinster at the RDS - the 11th straight weekend they will play a game. After losing narrowly to Munster at home, Connacht were well beaten in Belfast on St Stephen’s Day as Ulster claimed a 35-3 win.

“We are skinny,” admitted Friend. “It’s physical and it’s mental. As a squad we’ve never been through a block like this. I believe years ago there was a 16-week block but it wasn’t Champions Cup at the same time.

“It’s a really testing time but out of the hottest fire you get the greatest steel. That’s the way I’m looking at it, for us in the future. There is a bit of pain at the moment - without a doubt that was painful on Friday night against Ulster - but in the future we’ll be a better football team for it.”