Ulster in bonus-point territory with Pro12 win over Ospreys 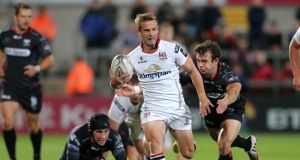 Not the worst way to open thing with a bonus point win in the bag and another home win to launch Ulster’s Pro12 campaign in the right direction.

Andrew Trimble showed up well, as did Nick Williams, but the most notable performance of the night came from centre Stuart McCloskey who not only scored a great try but also, surprisingly, turned out to be a useful placekicker.

It didn’t seem long after the noise had ebbed away for Trimble’s Kingspan return when Ulster were out of the blocks thanks to some soft hands from the returning Nick Williams, helping Willie Faloon put skipper Rob Herring over.

McCloskey – an unexpected choice as kicker but pressed into action after both Ian Humphreys and Sam Windsor missed out with injury – missed the straightforward conversion but made amends with a ninth minute penalty to take it to 8-0.

Following Same Davies’s 20th-minute penalty, though, and Trimble erupted into the game with his carry from a high kick helping set up some quickly recycled ball down the right for the strong-running McCloskey to smash his way to the line.

The centre also added a very useful conversion and at 15-3, Ulster looked in good shape even though the half finished 15-6.

McCloskey struck early with a penalty before Wiehahn Herbst wrestled over in the 50th minute though this score went unconverted by McCloskey.

After that the benches were emptied and the game lost all its shape with Ulster failing to take anything from Joe Bearman’s sin-binning.