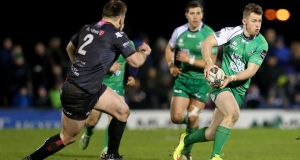 Ireland coach Joe Schmidt’s decision not to release Ultan Dillane for this weekend’s Guinness Pro12 fixtures suggests that the young secondrow could push strongly for a starting place against Italy in the Six Nations Championship on Saturday week following a hugely impressive 15-minute cameo at Twickenham.

Unless injury is a consideration, the general rule of thumb is that the match-day replacements in the national squad, get to play provincial rugby the following week, as evidenced for example by Dillane’s Connacht and Ireland team mate, Nathan White who makes the trip to the Scottish capital.

Quinn Roux will play his first game of 2016 after recovering from an ankle injury, one of four changes to the side that beat the Ospreys last time out.

Connacht will be hoping to accomplish something only one other side has managed this season – Munster – in beating Edinburgh at Murrayfield.

When the sides met earlier this season, the Irish province enjoyed a narrow victory in Galway.

The home side will be without Alasdair Dickinson, Ross Ford, WP Nel, John Hardie and Stuart McInally, who have been retained by Scotland coach Vern Cotter while Connacht will be missing Dillane and Robbie Henshaw in terms of their test players.

Brian O’Driscoll has added his voice to the chorus of those who feel that Connacht’s left wing Matt Healy might be worth a place in the Ireland squad. It’s easy to see why.

The former Gonzaga schoolboy and one time scrumhalf, possesses top-end pace, can step off either foot, works hard to get on the ball, is a prolific try scorer and has improved his defending, something that had initially stalled his progress.

This is a tough remit for the league leaders but Connacht have proved all season that they have the capacity to manage most challenges they are confronted with.

1 Andy Farrell ticking all the boxes in advance of England showdown
2 Owen Doyle: Day of the jackal may be coming to an end
3 Ireland wary of Peyper calling the tune as they head for Twickenham
4 David Brady says he's witnessed illegal payments of GAA managers
5 Players impressed with Bono’s Irish pride and desire
Real news has value SUBSCRIBE