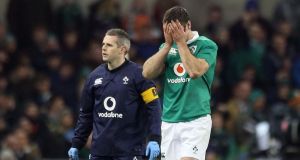 Johnny Sexton will not play for Leinster this weekend against Dragons in the Pro12 league. However, management hope that he will be fit enough to line out against Northampton Saints the following week in Franklin’s Gardens for the European Champions Cup.

That seems simple enough except that Joe Schmidt stated last weekend that Sexton needs “a window of time to really make sure he can be more robust”.

Schmidt added: “That’s probably one of the things that comes up for discussion now that this [international] window is over.”

There is agreement that the health of the Leinster and Irish outhalf is paramount, but there also appears to be room, not for the first time, for potential conflict between national and provincial interests.

“At this moment in time, from my understanding, he’s not available for this weekend against Dragons,” said Leinster backs coach Girvan Dempsey.

“Depending on him meeting the criteria and ticking the boxes of his return-to-play stuff for next week, we’re hopeful that he will be back on the field and, potentially, in line for selection for Northampton.”

Sexton was replaced in Ireland’s first match against the All Blacks in Chicago, did not start against Canada, went off again against New Zealand during the second match in Dublin and did not make the field for Ireland’s final series win over Australia in Aviva Stadium last weekend.

He is currently suffering from a hamstring problem in his right leg.

Schmidt is clearly seeking a bigger and wider-ranging discussion about why Sexton is frequently breaking down and suggests that a more thorough examination of why that might be happening should take place in this non-international window.

The Ireland coach is clearly not saying that if Sexton ticks all the boxes he should go back into competition straight away. He is not saying that the one size fits all procedures for monitoring and rehabbing is appropriate for Sexton’s running injury issues.

But Leinster’s needs are more immediate and they are determined to have one of their most influential players back on the park for the pre-Christmas back-to-back matches against the Premiership club.

One question is whether Schmidt, in conjunction with medical opinion, has the final say in what is best for the Irish outhalf.

“Potentially,” says Dempsey. “As you said, it will be discussions. I think ultimately that’s what it has to be. It has to be making sure what’s in the best interest for Johnny.”

That’s where the divergence may arise, on the issue of just what is best for Sexton. The player has historically not been one for suffering opinions from anyone other than those who have had recourse to his medical files and that came out strongly when he was forced to take time out for concussion when playing for Racing Metro.

And while Leinster’s view is that they will do nothing to hurt their prized asset, if he is fit to play, they do want him facing Northampton. The player also has the right to play if Leinster medics give him a clean bill of health.

“If he is fit, yeah,” says Dempsey. “If any player is fit, he’s passed all the required return-to-play protocols or markers, in terms how many metres they’ve got to run, how many high-speed sprints they’ve got to achieve, change of direction, kicking . . .

“There’s a whole list of criteria that he has to go through and tick all the boxes on that. If he ticks all those, he’s passed fit.

The former Irish fullback added that he had not spoken to the national coach about the matter but declined to elaborate on whether there was any merit in what Schmidt said. He was also asked whether, given Sexton’s injury profile, there was a concern in Leinster that Schmidt was thinking about Sexton in terms of a break from the game.

“Possibly, I don’t know,” he says. “I will state a few things. We’re fortunate that we’ve had 47 players play for Leinster this year already. Seventeen of them have played international football and we’ve had five new caps over November.

“We’re not going to put any player into a situation where they’re under any sort of duress, where they feel they’re going to get injured.

“Look, Johnny’s situation is being monitored. He’s receiving advice from our medical department in conjunction with the IRFU. He’s undergoing a rehab programme.

“I’d imagine discussions will take place, potentially, between Leo and Joe about the best course of action.”

To be a fly on the wall for that one.