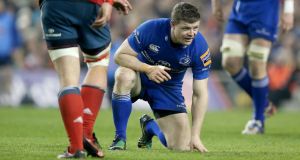 Leinster and Munster emerged grateful for seemingly emerging relatively unscathed from their annual warm-up for the Heineken Cup knock-out stages.

Of the two, Leinster were assuredly the happier, Saturday night’s 22-18 win having opened a five-point lead over their rivals in the Rabo Pro12 and with an eight-day turnaround with which to strengthen their hand for next Sunday’s imposing quarter-final away to European champions Toulon.

By contrast, not only did Munster miss the chance of going top with their first win in five attempts at the Aviva after their supremacy over a revamped Leinster scrum helped them into a 12-3 lead, they have the bigger injury concern over their captain Peter O’Mahony.

The hamstring problems which have plagued him since early in the Twikcenham game, sidelining him from Ireland’s win over Italy, reducing his influence in Paris and apparently preventing him from and meaningful training last week, flared up in the Aviva warm-up.

Rumours had surfaced from well before kick-off that he wasn’t playing, although he did conduct the captain’s toss-up opposite Jamie Heaslip before his name was crossed out from the official team sheet.

“We don’t know what the core problem with Peter is,” admitted Rob Penney a tad disconcertingly. “It’s a hamstringy-ish thing.

“But it may be nerve related. It’s one of those ones, obviously there were reports coming out of the Six Nations that he had that going on, that’s public knowledge. And he’s been fine but it just flared up so we were just being very cautious with him.”

‘Big players’
“You always want your big players available, it could be potentially damaging,” added Penney, who also ruled out Donnacha Ryan and praised CJ Stander’s performance in place of O’Mahony. “I’d love to think we’ve done the right thing by Pete this week to make sure he’s available next week. It will be very disappointing if the injury lingers. I’d be very surprised if it did but you just can’t be guaranteed with these things.”

The Munster coach admitted that his team’s kicking and attacking games struggled to adapt to Saturday’s increased intensity, and with Toulouse to come to Thomond Park next Saturday, commented: “Certainly we got a bit of a lesson in a few certain areas. We’ve got some good lads here. They just haven’t had the time to settle in with that intensity. It will be very beneficial for us going into next week because they will know the step up that is required. And they’ll have to step up even higher again with Toulouse being the quality outfit that they are.”

Matt O’Connor was very optimistic that Cian Healy, Jack McGrath, Marty Moore, Rhys Ruddock and Dave Kearney would come back into the equation for Sunday’s quarter-final in Toulon. As for fears that Saturday’s match-winner Brian O’Driscoll suffered concussion, O’Connor was adamant that “he got a bang on the neck”, adding when it was suggested that he looked concussed: “Did he? Are you a doctor? Arthur Tanner (the Leinster team doctor) didn’t think he was.”

Stretching the calf
Eminently less alarming was O’Driscoll stretching the calf muscle problem which has nagged at him this season. “He’s old mate,” quipped O’Connor, “and he’s got a tight calf. He’ll be fine.”

The Leinster coach derived huge satisfaction from the squad effort in coming through Saturday’s adversary, not least in making a defensive statement a week before facing Toulon’s direct, power game.

“The intensity is exactly what you need going into a game of that magnitude, so from that angle we’re pretty happy. There’s things to fix. We’ll look at it with a very critical eye, and make sure that we are exactly where we need to be next Sunday.”

“They (Toulon) will be bigger than Munster. They will be very, very competent at set-piece, and they will back themselves to bully us and we’ve got to make sure we meet that challenge head on and that we get parity there.”

O’Connor coached Leicester at that stage last season when beaten 21-15 in Toulon. “You have got to make sure that in those 50/50s you are on the right side of the ledger. Wilkinson will kick all of his goals, their lineout, their scrum; they have Bastareaud, world class blokes all over the field. If you’re inaccurate in any aspect you’ll get hurt, that’ll be our challenge.”

By co-incidence, Toulon hosted Toulouse in Marseilles on Saturday evening, and similarly Toulouse made the early running before being over-hauled 32-28 after the pivotal sinbinning of Akapusi Qera by Romain Poite.