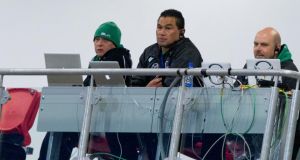 Connacht head coach Pat Lam during the game against Ulster at Ravenhill.


It has been a debut season of mixed fortunes for Pat Lam in Connacht but the former Samoan international believes his side created a record when losing heavily to Ulster at the weekend - they failed to win a single penalty in the game.

Connacht were hammered 58-12 by Ulster at Ravenhill and Lam said that of all the stats from the game, the one which astounded him most was that his side didn’t get a single penalty.

Lam stressed he wasn’t being critical of Welsh referee Ian Davies but on a night when their stats matched Ulster in a lot of areas, there were glaring gaps in others.

“I think it is a world record, the zero. I would say that is the first game in my playing and coaching career - around 400 games - where a team had zero penalties awarded.

“I have no issue with the referee but it is a rarity and that one just stands out. It meant we didn’t have any attacking lineouts.

“We had no lineouts whatsoever on attack. All three lineouts were in our own half. We had not attacking lineout, we made a lot of errors and we got punished by quality players. Some of the soft tries we conceded were disappointing and frustrating,” he said.

Lam produced a series of stats at his weekly press conference yesterday to show that despite the eight tries to two defeat, they were even with Ulster is so many areas.

“We had them under pressure but we didn’t execute it,” said Lam, who added that he is fearful of another backlash this weekend when they entertain a Munster badly in need of a good display following their dismal loss to Glasgow Warriors ahead of their Heineken Cup semi-final against Toulon.

Lam has no new injury worries ahead of Saturday’s game at the Sportsground with prop Rodney Ah You expected to recover from a bloody eye, while Fionn Carr should also be available from a knee problem.

Flanker Willie Faloon, who had hoped to return against Ulster, may be in the reckoning