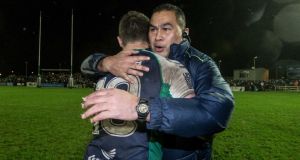 “I think Leinster was big in round three but it was round three,” said Lam in reference to their previous big scalp here. “Where the table sits now and what is riding on the game, the fact that we are starting the mid-season and we needed the four points that was first and foremost.”

“But I am extremely proud of the guys, it was a game that we had to win. I said at the start of the week that we pick a game plan around the battle that we will face, and, watching what Munster did to Leinster last week, we put a bit of work into it this week, and fair play to the boys, they did it together and it was a fantastic effort. In all of my time in Galway I have been hearing about the wind and hearing about the rain, you get a little bit and that was probably the worst we have had.

Connacht are now unbeaten in eight games at the Sportsground this season, and Lam revealed: “We set out our team goals and we do a workshop and they all come back and that fortress was a big one. We have the stadium that’s not the best in the competition but people keep showing up, and we want to give them something.

“The boys made that conscious decision based on those supporters, and the results at home have exceeded the budget and the numbers of what they thought would be coming in.”

There was also evidence of the rich potential in the Bundee Aki-Robbie Henshaw partnership. “He just gets better and better,” said Lam of Henshaw. “It’s only his second game with Bundee, the two of them get on really well.This whole thing that we are doing is that we have a small squad, but in the group there is massive competition. The guys help each other, they make sure there isn’t cliques, they have lunch with different guys.

Anthony Foley echoed Lam’s sentiments about Henshaw. “He was outstanding, he was immense. Physical, direct and he made good decisions in the open spaces. It would have been hard to hold a ball there tonight, but I don’t think he made a mistake. He’s an international centre and we’re delighted he’s Irish.

The Munster coach was equally generous about Connacht, who he said were now as competitive as they were under Warren Gatland.