Paddy Jackson returns from injury for Ulster clash with Connacht 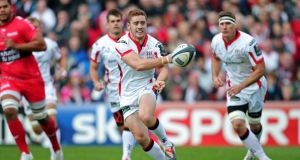 Ireland international outhalf Paddy Jackson returns from a shoulder injury to take his place in the Ulster side for the sold-out Guinness Pro 12 fixture against Connacht at Ravenhill on St Stephen’s Day (6.45pm).

Jackson suffered a heavy fall on the shoulder in the home victory over the Ospreys on November 21st and has missed the last four games for the province.

He takes over from Ian Humphreys at No 10, one of seven changes from last weekend’s defeat away to the Ospreys.

Jackson will form a new halfback pairing with Paul Marshall after South African star Ruan Pienaar failed to recover from a knee injury picked up against Ospreys at the weekend. Wingers Craig Gilroy and Peter Nelson are the other new faces in the backline, replacing Bowe and Michael Allen respectively.

Both regular skipper Rory Best and Tommy Bowe are rested under the international player welfare programme, so Roger Wilson will captain the side in what will be his 300th professional match.

Rob Herring starts at hooker in place of Best and is joined in an all-new frontrow by props Callum Black and Wiehahn Herbst. The remainder of the pack is unchanged from the game at Liberty Stadium, with Dan Tuohy and Franco van der Merwe continuing their partnership at lock and Robbie Diack, Clive Ross and Wilson again combining in the backrow.

Connacht coach Pat Lam has made six changes from the defeat to Leinster at the RDS .

Darragh Leader, the sole squad member to have been involved in every game so far this season, starts at fullback. In the absence of Ireland international Robbie Henshaw (player welfare), Bundee Aki shifts to outside centre to allow Dave McSharry come in at number 12.

Up front, the props are rotated with Ronan Loughney and Finlay Bealham starting this week with Tom McCartney at hooker.