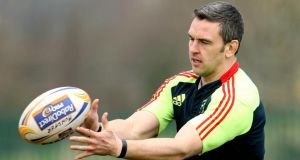 Injury has forced Niall Ronan’s hand as he calls it a day at the age of just 31.

Munster’s Niall Ronan has been forced to retire because of injury. The 31-year-old flanker, one of just seven current squad players with over 100 caps, has not recovered sufficiently from a knee injury he picked up in October of last year and will not play again when the season ends.

Ronan joined Munster in the 2007-08 season, making his debut against the USA and had played a key role in the province’s success since then. Acting on medical advice, he informed his teammates of the decision at training today in UL Bohemians.

Ronan intends to return home to Drogheda and set up a business there in the area of injury and rehabilitation, a subject he had been studying while playing with Munster.

“I will return to my home town of Drogheda and set up a business in the line of work I’ve studied for, focussing on injury and rehabilitation,” said Ronan in a statement.

“I believe my experience as a professional rugby player will help me in this regard and I am looking forward to supporting my old club Boyne RFC from the sidelines, going back to where it all began for me.”

Ian Nagle, currently on loan at Newcastle will also finish with the province at the end of the season despite being offered a Munster contract. The 25-year-old lock has decided not to return next season, where it was announced in February that Anthony Foley would be taking over from Rob Penney, but to look elsewhere for career progression.

Denis Hurley and Johne Murphy, however, have both signed one year contracts. The Two back line players will now remain at the province until 2015.

Munster have also signed up Dublin University prop Martin Kelly on a one year development contract. The 24-year-old tighthead played with Leinster ‘A’ this year.