Munster drive home advantage as Connacht do them a favour 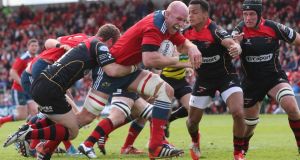 As Super Saturdays go, this wasn’t quite on the scale of the Six Nations finale, although of all the final day games of the Guinness Pro12’s regular season, this Musgrave Park try fest came closest to catching the mood of that day.

Munster went into the match knowing that they effectively needed a bonus-point win while also hoping that neither Ulster nor Connacht conceded a five-point haul away to Glasgow or at home to the Ospreys. In the event, Ulster conceded four second-half tries and a bonus point win to Glasgow, whereas the Ospreys – three tries to the good by the 28th minute – were kept scoreless thereafter by Connacht.

News of Munster’s ensuing semi-final against the Ospreys at Thomond Park next Saturday at 2.30pm – though not the reasons for it – brought a huge cheer. Glasgow will again host Ulster in the first semi-final at Scotstoun in Glasgow next Friday (7.45pm).

Although their second half comeback came up just short in a 24-20 defeat, Connacht secured a spot in the play-offs for next season’s European Champions Cup thanks to Leinster’s 36-23 win away to Edinburgh, which meant Matt O’Connor’s secured fifth place and the Scots finished outside the play-offs in eighth.
Connacht will now play Gloucester away next Sunday, with the winners then at home to the seventh placed side in the Top 14 the following Sunday – possibly Montpellier or Bordeaux.

The Scarlets’ win away to Treviso ensured the Welsh region of sixth place and the last automatic spot in next season’s European Champions Cup, while Treviso still edged out Zebre as Italy’s sole qualifier.

The refurbished Musgrave Park looked a picture in the May sunshine and pitch looked fit for snooker, never mind rugby. As so often happens when a superior team is chasing tries and a bonus point – and as happened here last time out against Treviso – they can also become a little distracted along the way and hence a little sloppy defensively. The weaker side, with little tangible to play for, might themselves shirk a few tackles but also indulge themselves when the opportunity arose.

So it was that the score read 14-10 inside 10 minutes of the kick-off, while Munster – thanks to a brace of back-to-back tries by Conor Murray – had their bonus point by the 23rd minute. To all intents and purposes, by that point their job was done.

Considering all of that, Munster actually stayed focussed pretty well. Their maul once again remained their most potent and reliable source of go-forward, and indeed tries. Eusebio Guinazu, BJ Botha, Paul O’Connell, Donnacha Ryan and the in-form CJ Stander had good games and behind them a close-range hat-trick – from a cumulative distance of three metres – brought Conor Murray’s tally to six tries in a more responsible, and indeed singularly productive, season.

Initially, Munster were far more switched on offensively than defensively, in what was such a fast and loose opening that it almost felt unreal. After a Jason Tovey penalty opened the scoring in the third minute, Paddy Butler retrieved a partial O’Connell charge down and fed Murray, who in turn linked infield with Ian Keatley. He ran it back, taking out a couple of defenders and slipping an offload to Andrew Smith, who showed a good turn of foot to gallop in from about 40 metres.

Within a minute though, Munster’s kick-chase from a Murray box kick which didn’t have enough air saw Toby Faletau run the ball back and put Ashton Hewitt over in the corner. So within four minutes they atoned, turning down a shot at goal in the eighth minute to go to the corner, where Butler gathered Guinazu’s throw, and Stander was the back of a well-formed maul to plop onto the line for his ninth try of the season and 18th overall for Munster.

Next time around, Murray’s box kick had better hang time and Keith Earls was on hand to contest when blocked by Hewitt. Instead of retreating behind their line, Munster were attacking again. Soon they were again eschewing a routine three points to go to the corner, and although the maul and Guinazu were held up short of the line, as was Botha, the prop’s ball presentation and a quick clear-out enabling Murray to dummy and plunge over.

Although another lineout drive and ensuing pick-and-goes following another penalty to the corner were held up, the increasingly Murray tapped off a scrum penalty and when Denis Hurley made good hard yards of a first-off carry, again the presentation and clear-out led to Murray pirouetting through Jonathan Evans’s tackle to score and seal the bonus point.

With the match clock inching toward the 40-minute mark, their scrum earned one more attacking penalty to the corner and another lineout maul, which regrouped patiently after initially being driven back and as a pod of five drove infield, O’Connell broke off the tail to run it in from about five metres for his first try of the season on his first appearance of the season at this ground.

That made it 33-10 at the break and meant that Munster’s hopes of a home semi-final rested on either of Ulster and Connacht not conceding a bonus-point defeat to Glasgow and the Ospreys. With Ulster leading Glasgow at half-time, that seemed plausible.

Munster, and indeed the Dragons, made a good fist of going through the motions in an academic second half. Hurley made the inroads for a classily taken try by the backs, as straight running and good hands by Smith and Felix Jones put the in-form Earls away for his sixth try in his last seven games.

Dorian Jones did penetrate a softish Munster infield defence to put Tyler Morgan over, prompting Munster to refocus and go to the corner once more for Murray to claim his hat-trick.

Murray went off to a standing ovation, as did O’Connell soon after but the increasingly subdued mood may have been the result of word coming through that Glasgow had, like the Ospreys, moved on to three tries with five minutes to go.

A try by Dragons replacement hooker Rhys Buckley further diluted things, as did news of Glasgow scoring a fourth try, although a superb long-range finish by Ronan O’Mahony lifted things before Jack Dixon scored another consolation try for the Dragons.