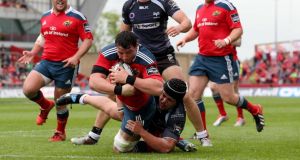 Munster would have been kicking themselves all summer for letting the Ospreys off the hook with six missed kicks amounting to 15 points and coughing up a couple of self-inflicted tries. There again, the Ospreys left a few tries and kicks behind as well in a wild, whacky and controversial semi-final.

As Paul O’Connell waved to the crowd for what seemed, for all the world, like a valedictory farewell to both sides of the ground, Munster traipsed off to the sanctity of the dressing-room to celebrate their first final since winning the trophy against Leinster in the final here in 2011.

As is seemingly invariably the case with a referee like Nigel Owens, who lets games breath rather than suffocate them like, say, Wayne Barnes, it was tit-for-tat, edge-of-the-seat stuff right up until the 80th minute and even beyond. Then Josh Matavesi’s apparent match-winning try was correctly over-ruled when Owens went back to the TMO to see an earlier knock-on at the base by Rhys Webb.

O’Connell, seemingly bound for Toulon, was immense as were man of the match CJ Stander, the outstanding David Kilcoyne and Paddy Butler, as Munster generally took a more direct route as they varied the point of attack and constructed some fine tries. But their game management was questionable, and the Ospreys, typically, never went away and always remained the more potent threat wider out and in broken play.

Munster will anxiously await news of three major casualties, Conor Murray, Peter O’Mahony and Simon Zebo, having survived their losses impressively if not without many alarms all the way to the extraordinary finish.

Murray suffered a knee injury when taken out so late, seemingly by Dan Lydiate, that most people didn’t see it. In any event, after lengthy treatment, as he walked off he gave a long, accusatory stare in the direction of a cluster of Ospreys players including his one-time fellow Lions tourist.

Both sides probably felt their chances of winning the trophy had been increased by Glasgow’s controversial late win over Ulster, which made next week’s final in the Kingspan Stadium a neutral final rather than away one for the winners. The crowd of 16,158 was in full voice on a nice, dry, if cloudy and breezy day.

The Ospreys should have drawn first blood and to a greater scale than they did after a bright start. Dan Biggar having missed a drop goal, twice then worked one-man overlaps in Munster’s right-hand corner. But on the first occasion Biggar’s one-handed pass eluded Scott Baldwin and went into touch, and on the second Eli Walker beat Felix Jones a mite too easily and probably had taken Stander’s tackle before the covering Murray saved the try with some of his trademark corner-flagging tackles.

Munster’s response in a near error-free opening quarter was to go through the phases themselves – with Kilcoyne making two leg-pumping carries – before Stephen Archer was tackled into touch short on the line.

The Ospreys were as competitive as ever at the breakdown, Tyler Ardron winning one turnover and after Archer was unlucky to be penalised for not rolling away after stopping Jeff Hassler in his tracks, Biggar opened the scoring.

During Munster’s next multi-phase attack though, a huge, concerned hush descended over the hitherto vibrant Thomond as Murray lay in a heap off the ball and was attended to, having been hit late after moving the ball on. Keatley stepped in to scrumhalf, and Kilcoyne’s high-energy start yielded some reward when a high tackle by Dan Baker on the loosehead led to Keatley drawing the sides level.

The palpable concern as Murray was led off eased a tad more when Munster turned to their hugely potent maul for the first time. With perfect, waist-high body positioning and co-ordination, it rumbled infield and onwards like a tank and when it was brought down Keatley made it 6-3.

A couple of Ospreys turnovers in contact followed, but their lineout was proving difficult to trouble and ensured some good quality ball for the Ospreys until a timely steal by O’Mahony and his lifters. After a good touchfinder by Keatley, O’Mahony made another superb steal at the front, but the Ospreys’ defence resisted Munster’s varied points of attack as, already, their ruck ball seemed to be coming back more slowly.

Aggrieved by a couple of consecutive penalties against the home side, the crowd enjoyed their biggest roar of the game when Biggar’s attempted penalty to the corner found touch in goal from the 10-metre line.

A big Munster shunt then saw Ospreys’ frontrow buckle to the turf, only for Keatley to also. Even so, Williams was blatantly blocked by Webb when chasing his own up-and-under after a good take, and right in Nigel Owens’ line of vision. But Keatley’s penalty was blown just wide from 45 metres by the crossfield wind.

When Dan Evans also kicked long and dead from half-way, suddenly the stakes had started to mount for the visitors. Perhaps their lack of experience was beginning to show under the pressure of the occasion. It proved costly too, from the resulting scrum (and last play of the half) Stander fed Williams and Keatley dummied a loop move to Williams, beating Biggar and offloading out of the next tackle inside.

The other key to the score was the line of support runners, as Stander steamed onto the ball and passed inside for Paddy Butler who made good yards before giving Simon Zebo a run-in. Although Keatley screwed the conversion horribly, Munster went in 11-3 up and with an extra pep in their step.

When Evans kicked out on the full after the Ospreys brought the second half restart back into their 22, Munster were on the attack again. O’Connell made the first inroads with a big rumble, O’Mahony and Stander followed suit, before the halves worked it wide to Denis Hurley, who brushed through Walker’s tackle for a fine finish by the right-hand flag.

But so began a whacky spell, for this would be the second of five tries in 15 minutes either side of the break. Munster also lost O’Mahony at this point, and the ensuing reshuffle which saw Billy Holland come into the secondrow and Donnacha Ryan shift to the backrow also de-powered the Munster scrum.

Yet, leading 16-3 in a cup semi-final, Munster’s game management was decidedly curious at this point as they opted for a risky move outside their own 22 off a retreating scrum as Williams ran infield and Stander scooped the ball blind, intended for Zebo. Webb picked it off to run in untouched for his 19th try of a remarkable season for club and country .

Back came Munster, Stander running back a long kick by Biggar. Keatley kept coming onto the ball at pace, and Jones took a good close-in line to offload for another rumble by O’Connell; Kilcoyne brushing off a tackle or two and from the quick recycle Butler – whose lines of running had been a feature of the game – came steaming onto Williams’s pop to score.

However Keatley’s conversion came off the upright, and soon after it was, amazingly, a one-score game. Zebo, who became a father last week, went for a grubber inside how own half wide out which rebounded off Hassler’s heels. The winger picked up, turned, eyed up and beat BJ Botha and Holland, and Zebo couldn’t haul him before the line. Biggar’s routine conversion made it 21-15.

Reprieved and emboldened, Ospreys began to look particularly dangerous in broken play. Hassler was denied by Keatley’s tackle, and Josh Matavesi broke through only for his offload to be picked off by Williams. Munster went through the phases more directly before Williams’s pass missed Keatley, and Hassler appeared to take out Zebo quit high after the winger’s take but instead Owens pinged Butler for going off his feet.

Unlike George Clancy the night before, the unmoved Owens did not go to the TMO as Zebo received lengthy treatment. After he was led off, Biggar made it 21-18.

Williams brought some order to the madness when Walker’s offload was intercepted with a good touchfinder. Good lineout pressure led to Rory Thornton being penalised for holding onto the ball, but Keatley screwed another kick wide and was promptly replaced by JJ Hanrahan.

More significantly to begin with, as soon as Ospreys loosehead Nicky Smith was taken off, their frontrow buckled, only for Hanrahan to also miss the straight-ish, 40-metre penalty. Munster went wide, but Hassler turned in time to prevent Ronan O’Mahony latching onto his own grubber. Cue O’Connell, whose poaching after the lineout take earned a penalty. Unable to buy a kick, Munster went to the corner, only for Owens to ping Duncan Casey for holding on.

The Ospreys had two minutes left off a lineout near halfway. Webb appeared to knock-on at the base, before Marc Evans broke up the middle. Jones did enough to stop him but off the recycle Ospreys went wide where Matavesi stepped inside JJ Hanrahan to seemingly score.

Without signalling a try, Owens immediately went to the TMO to check, and the Ospreys player who had presented the ball at the ruck – possibly James King – pulled the ball back in for protection, which instead took it forward from Webb’s pick-up. The crowd roared in delight as Owens adjudged a knock-on, despite protests from Alun Wyn Jones. One of the games of the season. Yet another dramatic endgame under Nigel’s watch.

Munster were reprieved and just a tad relieved.

San Francisco 49ers increase stake in Leeds United to 37 per cent 18:10
Jockeys shocked and appalled at Viking Hoard case 17:00
Down Royal facing inspection ahead of Tuesday’s fixture 16:31
Pro14 release fixture details for remainder of season 18:15
England rip through Sri Lanka to seal series victory 12:29
Here is your handy guide to sport on television this week