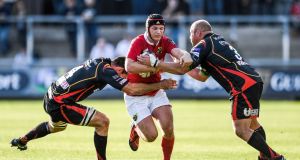 Tyler Bleyendaal of Munster is tackled by Nick Crosswell and Brok Harris of Dragons during their Pro12 clash. Photo: Inpho

The talk after this hard-fought victory was of Munster going back to their roots, rather than the start of a revolution under Rassie Erasmus.

Certainly for the first hour at least there were glimpses of the sort of rugby which helped Munster to six Celtic League finals and three titles over the last 15 years.

The Newport Gwent Dragons simply had no answer to Munster’s power up front but this domination wasn’t reflected on the scoreboard and had the home side made the most of a late driving maul deep in the visitors’ half, Erasmus’s side could have been leaving Rodney Parade with one point instead of four.

But credit must go to Munster for the way they defended the late attack to hold on for a second impressive away win of the season, having beaten Scarlets 23-12 on the opening weekend. It’s the first time they have secured two straight wins in Wales since November 2014.

It will go some way to atoning for the disappointing 24-23 defeat at home to the Cardiff Blues in round two and with two home games against Edinburgh and Zebre to come over the next fortnight, there is a chance to gather some early momentum under Erasmus.

“We can’t ignore where the team is coming from and where it’s going,” said the South African. “We are ticking the boxes slowly. It’s not going to happen quickly; we have been struggling but what’s pleasing is the way we hung in there.”

Erasmus had recalled some of his big guns after the narrow defeat to the Blues but Ireland international Keith Earls was a late withdrawal because of a hamstring injury and a late reshuffle was needed.

Earls’ replacement, Colm O’Shea, lasted a little over half an hour after being forced off immediately after handing the Dragons their first try with a poor pass that was intercepted by Wales international Hallam Amos, who went under the posts from 40 metres.

But if the luck had deserted Munster early on it came back with abundance for what proved to be the game’s winning try in the second half.

Wing Darren Sweetnam finished off a Munster move in the corner but when he tried to get closer to the posts rather than touching the ball down he was hit by a stiff tackle from behind by Amos. Luckily for Munster the ball went backwards rather than forwards and replacement centre Cian Bohane was quickest to react to touch down.

“It wasn’t pretty,” admitted Erasmus. “There was a lot of guts involved but you can’t go too far on just guts. There is a lot of things that needs to be sorted out.”

Finding their ruthless streak is one such issue that needs to be addressed having dominated possession in the first half, only come away with one try to show for their efforts.

Home matches against Edinburgh, who’ve made a less-than-impressive start to the new campaign, and the improving Italian side Zebre should provide Munster with opportunities to hone their attacking play before star names such as Conor Murray and Earls go away for the autumn internationals with Ireland.

Man-of-the-match against the Dragons, John Ryan, said: “We are coming on from last season, we had a poor campaign and we need to build because we’ve already seen that the league is getting very competitive. There are no automatic four- or five-point victories like maybe there were in previous seasons.

The win over the Dragons moved Munster into the top six, with the Ospreys, Ulster and Cardiff Blues all setting the pace with three straight wins.

Munster face Ulster and the Ospreys on consecutive weekends at the end of October and beginning of November, following rounds one and two of the European Rugby Champions Cup, so the next two home games and an away fixture at Leinster will be crucial to setting their league campaign off on the right path.