Marshall shrugs off concussion worries as he eyes starting place 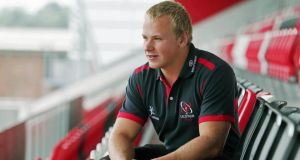 Luke Marshall has had his problems. Concussion followed by concussion along with Gordon D’Arcy’s refusal to go quietly into the international wilderness stalled the Ballymoney man’s arrival last season.

The 23-year-old’s abilities are unquestioned in the troublesome second five-eighth position. He also brings plenty of muscle allied to guile and an extensive passing range.

Marshall climbed through the Test window in February 2013 and survived the helter-skelter bombardment that inevitably followed.

Can the pair of them, combined age 44, play together now that Jared Payne and Darren Cave are on ice?

“Stuart has played really well this season so it will obviously be a tough battle, but if I keep working hard, keep improving I will get that jersey off him. ”

Olding has looked sensational this season but Marshall is bigger, more menacing. “Yeah, I’ve got a few kilos on him but he is pretty quick and nippy, so that might be a disadvantage.”

What makes the scrap to nail down the Ulster position so important is the Jared Payne factor. Almost certain to be given an opportunity to play outside centre for Ireland in November, whoever partners the adopted Kiwi in Ulster’s midfield may coat-tail into starting XV.

“Jared brings that New Zealand mindset. Whatever way they have developed down there in the southern hemisphere, they vary the game better than we do up here. He sees things a little quicker, he’s always playing heads-up rugby, not sticking to the patterns.

“Playing inside him as a 12 is very easy. His lines of running are impressive, so you can always look to offload. He is a pretty good defender too.”

That sounds eerily like a description of the recently-retired centre we purred about for 15 glorious years.

Moving on. Or moving backwards, as it initially seemed when David Humphreys, then Mark Anscombe followed Johann Muller and Stephen Ferris out the Ravenhill gate. So many body blows and somehow Ulster stay erect.

Up the road from Dublin came Les Kiss (until mid-October) but it looks like Ulster have been forced down the Munster route; an indigenous coaching ticket of Neil Doak, Johnny Bell and Allen Clarke.

“Les came in and really he has been brilliant. He hasn’t just watched training; he has been hands on, brought that intensity we have in national camps.

“And attention to detail. The other coaches have learned from that, but most of structures we have in place have come from Johnny and Doaky.”

“I think so. They are good coaches and have been in the set-up and been part of the success we have had in the past few seasons. If they stay, and with the quality of player we have as well, we can keep building. I don’t see any reason why we would want to change that.”

Ulster will confirm their long-term coaching structures next week. Doak is favourite to become the boss.

Marshall will be there so long as his head problems don’t reoccur. Not that he’s worried.

“It was just a bit of bad luck to be honest,” he said about the worrying string of concussions these past two years. “A stray boot or knee was all it was. I haven’t felt any ill effects. Fingers crossed I don’t get any more this season but if I do I don’t think it will affect me too much.

“I will be like any other player who gets a knock on the head; take a two, three-week recovery period and back into it.”