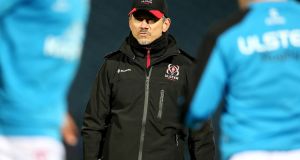 Les Kiss took over as director of rugby at Ulster after the World Cup and has brought a new intensity of play to the province. Photograph: Dan Sheridan/Inpho.

Briefly slip back to last September at the FA national training centre deep among the pines of middle England. Before a squad meeting there grappled Joe Schmidt and Les Kiss. They were seemingly debating a tackle technique. Every possible occurrence, every scenario down to the most minute detail was being, literally, played out by the since separated Ireland coaching duo.

Stroll by that same upper deck of the Hilton Hotel late at night – it was our only route to the small island annexed by journalists (the bar) – and we would more often than not spy Kiss buried in a lap top.

And again at the crack of dawn, as we went for our stroll through the St George’s Park countryside, there he was busy preparing the daily training and analysis routines. Simplifying it all for the players.

Workaholic can sound like a dirty word but Ulster are already reaping the benefits of placing the former Australian Rugby League international atop of their coaching structures.

“Oh, there is no difference, I’m the head coach on the ground. I do everything as a head coach. I operate the same.”

The same as he ever was having been mentoring Irish rugby players since 2008.

Neil Doak kept the ship afloat last season when Ulster reached the Pro12 semi-final and during the World Cup until Kiss got off to the worst possible start.

A powerful Saracens eight came to Ravenhill and broke Rory Best’s pack in a manner not seen in recent times. That last 20 minutes seemed like confirmation of what many feared: Irish rugby plunging further into recessionary times.

This seemed all the more depressing for Ulster as they never got around to capturing silverware when the going was good.

Andrew Trimble even touched on this yesterday, how they were sick of being the nearly men. That European final defeat to Leinster in 2012 followed by the Pro12 final defeat in Dublin two years later. Even the Jared Payne red card, which clearly forced a rule change for punishing tackles in the air, as they valiantly lost to Saracens in that 2014 quarter-final in Belfast.

“I think we are well capable of winning things,” said Trimble. “Eventually you got to stop making excuses and get over the line.”

But comparing those two Saracens defeats, 18 months apart, makes for grim viewing. In November it seemed like Ulster no longer possessed the tight five personnel to hold off the growing English tide.

Toulouse were next up to sack a seemingly dilapidated Ravenhill (despite its shiny new facade). Then something totally unexpected happened.

Thierry Dusautoir, Louis Picamoles and friends limped home with 38-0 etched in their brains. Revenge would be swift, surely. Nine days later Ulster took what seemed the best offering of the Top 14 leaders yet escaped Stade Ernest Wallon with 25-23 victory.

Suddenly, with the honeymoon period postponed, the age of Kiss in Belfast had become the one shining European light for Irish rugby.

“That home game against Toulouse, we really moved into a space where we could express the type of game we are trying to do. That gave us confidence going forward.”

Kiss gets plenty of credit for what happened under Declan Kidney’s reign as Ireland head coach but it was hard to know how deep his influence went under Schmidt. That he was kept inside the camp seemed enough but that Toulouse performance, the shape of the Ulster attack, the simple but important quick passing of ball into midfield where heavy carriers were waiting, showed immediate improvements under the new coach.

“We may have possibly caught Toulouse on the hop with the intensity of our game,” Kiss admitted, “but the second game they were certainly up for it down at home. That, for us, was a fairly major result for the club.

“The confidence we have gained from it is important but we have to remember what got us here. I have challenged the guys in terms of how we want to move the game around in terms of tactical shifts and they have responded to try and make that work. We are seeing some rewards for sure.”

What is evident in the wake of that Saracens defeat is the defensive resilience and ability to create and finish scores in what Kiss calls “the back end management of the game”.

This was most obvious on December 26th when Nick Williams was shunted over the Connacht tryline to snatch victory at the Sportsground.

With Iain Henderson a long-term injury, Williams has become crucial to how Ulster cross the gainline. The Kiwi number eight announced this week that he would be joining Cardiff next summer.

Victor Vito was rumoured to be arriving but La Rochelle have reportedly lured the All Black flanker to France.

“If we can get someone from outside that would be great but if not we will develop from within.”

Bryn Cunningham plays a similar role to Guy Easterby at Leinster in that they oversee player contracts and recruitment, which allows the coaches to coach.

“A lot of people are moving towards what they call a List Manager,” Kiss explained. “They look after all those major conversations and key negotiations [with players and agents] in terms of locking them away. Bryn does a great job in this regard.”

The huge value of a foreign recruit like Ruan Pienaar, both on the field and the development of halfbacks off it, is agreed by all but how Ulster build their squad, or are allowed to, will have a major impact on how successful Kiss can become long term.

All before Munster, described by Foley as being in the worst state he can ever remember having lost five on the bounce, ring in the New Year.

“That bloody worries me. But we are aware of that threat. It could be a cracker.”