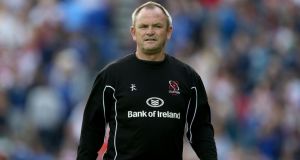 Mark Anscombe: had signed a one-year extension to his contract in February that would have kept him in situ until the end of the 2014-2015 season. Photo: Dan Sheridan/Inpho

The niceties dictate that the phrase ‘parted company’ is employed but effectively Ulster have sacked Mark Anscombe. The New Zealander did not know what was in the offing over the weekend and only learned of his fate yesterday.

Ireland’s defence coach Les Kiss will combine those duties with the responsibility of those as interim head coach for the province. There is no time limit placed on his dual remit.

Ulster rugby released a statement yesterday afternoon. It read: “Following the departure of director of rugby, David Humphreys, Ulster Rugby has today announced that head coach, Mark Anscombe, is to leave the province with immediate effect.

“Les Kiss will take-up the position of interim director of rugby to allow time for a review of the coaching structures at Ulster Rugby to take place. Kiss will continue as Ireland assistant coach and will combine his duties with the international side with his new role at Ulster.”

“Les Kiss will have an expanded remit for the province’s director of rugby and will lead the coaching staff, assisted by Jonny Bell and Neil Doak and will manage first team selection. His appointment allows us time to recruit for long-term success.” The statement added that Kiss would take up his new position on July 19th.

Anscombe had signed a one-year extension to his contract in February that would have kept him in situ until the end of the 2014-2015 season, at which point depending on the storyteller, assistant coach Neil Doak was touted as a strong contender to graduate to the top position.

The speculation pre-dated David Humphreys’ decision to swap his position as director of rugby at Ulster for that at Gloucester earlier that month. Logan could neither conceal his surprise or disappointment, despite the magnanimity of his words.

Humphreys had been 22 years as a player and administrator at Ulster and was responsible for some top-notch recruitment, players of the calibre of Ruan Pienaar, Johann Muller and John Afoa to highlight a couple of Springboks and an All Black: indeed Humphreys will be joining Afoa at Kingsholm.

Ulster’s player recruitment for next season has been low key comparatively and suggests that they possess the financial clout to offer an attractive financial package to entice a marquee coach. Logan stated that there would be a review of the coaching structures after Humphreys’ departure. Anscombe’s position would have been brought into sharp focus.

Ulster decided to pursue a new tack. The difficulty of recruiting a top echelon coach 15 months out from a World Cup is a tricky one but the Irish province considered it preferable to the alternative.

A spokesperson for Ulster confirmed they were looking to recruit ‘a significant international quality figure,’ and that there was ‘a priority to secure a right person,’ rather than rush to appoint someone.

He added: “In keeping with recruiting players, the window is generally between September and February but the important thing is to get someone in place at the latest by the start of the 2015-2016 season.”

Plenty of names will be thrust forward but among two of the more interesting are former Australian and Crusaders coach Robbie Deans (54), now in Japan with the Panasonic Wild Knights. Another is Wayne Smith (57), ex-Northampton Saints and All Blacks backs’ coach (2011 World Cup winning team), who is currently an assistant coach at the Chiefs.