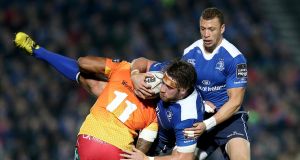 Leinster’s Dominic Ryan is tackled by Michael Tagicakibau of Scarlets during the Guinness Pro 12 game at the RDS. Photograph: Ryan Byrne/Inpho

A beautifully mild night and not a breath of wind in the RDS warmed a thin enough crowd behind the goals in Dublin’s Ballsbridge. Maybe the World Cup and valley of tears ending has drawn all the energy for now from the usually faithful fans.

Leinster’s hope was to gear up for Wasps next Sunday in the first round of the European Champions Cup. What they were looking for was an extra gear, composition, something to suggest this year’s premier competition is within their grasp.

What they got was fullback Rob Kearney hobbling off after 24 minutes with a strained hamstring and chasing for more than half the game as Scarlets opened with two tries in the first 26 minutes and led 15-9 going into half-time.

A slow start from Leinster gifted Scarlets with their first try after four minutes, Hadleigh Parkes bullocking through some softer shoulders under the posts. It was all too easy, too quickly and set a competitive tone for the visitors.

While Scarlets lock Jake Ball was binned for pulling down a rolling maul that looked destined for the try line, Leinster failed to wholly capitalise on the extra man and generally struggled to spark in the first 40 minutes, Ian Madigan’s boot keeping them in touch.

Flanker Dominic Ryan was also lucky the referee took a lenient view of his left handed slap at prop Rob Evans at ruck time in the opening exchanges as Leinster struggled to face Scarlets’ greater want and higher aggression on the gain line.

Their ball carriers were attacking the collisions more effectively and Gareth Davies at scrumhalf played with all the confidence a World Cup call-up for a young player affords.

It was shortly after Kearney limped out of the game, Ben Te’o came in and Garry Ringrose shifted out to the wing, that Scarlets struck for the second time, captain John Barclay making ground and popping up to Gareth Owen for a 12-6 lead for the visitors.

Madigan, always creative and pushing the game with an occasional skip pass going to ground kicked to reduce the deficit to three, a Jones penalty closing the half with Leinster having some work to do.

Whatever coach Leo Cullen said at half-time stuck. Within five minutes after the break, the lineout maul that had served so well in the first half took Leinster to Scarlets’ line.

There was more energy and urgency to Leinster and from three yards out lethal Mike Ross, with the help of some muscle from behind, dived in. Madigan was left with an easy conversion in front of the posts as Leinster took the lead for the first time in the match, 16-15.

Scarlets secondrow Ball was in a second scrape with referee Leighton Hodges when he barrelled into a ruck just short of midway through the second half taking Jamie Heaslip out of play. This time it was just a verbal warning, the lock claiming it was legit with arms and not from the side.

But Leinster controlled more and were winning the breakdown even as Ross and Cian Healy departed on 51 minutes. Johnny Sexton came into outhalf pushing Madigan out but it was Madigan who continued the place kicking, his fifth from five efforts importantly nudging Leinster’s lead out further to 19-15.

Sexton cleverly placed some crossfield threaded kicks to keep Scarlets turning and forced them to play in their own territory, which helped shift the momentum, all of it with the home side after half-time.

On 72 minutes, the crowd believed Sexton had scored the match-winning try but the TMO showed clearly that Leinster centre Noel Reid had obstructed on a dummy run as Sexton, hardly believing his luck, went on one of his trademark haring runs down the left channel.

The second 40 minutes and that Leinster won the match will have greatly brightened Cullen’s week. But with just one try from Ross off a lineout maul, the questions will be asked about the famed attack and backline with World Cup players on board, although not Dave Kearney or Luke Fitzgerald.

Leinster did show an extra gear and were able to demonstrate an urgency and tempo that knocked back the Scarlets. But it’s a head space they will need from the beginning next week.

Four points to keep them in the top four in the table and getting there. But not all the way there just yet.