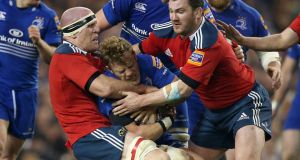 
The Leinster machine rolls on. A tenth successive win in all competitions and a 13th league win in a row at this venue – of which five have been against their rivals in red – has given them a five-point lead atop the table.

The champions still have treks to the Ospreys and Ulster, but with four games to go are well placed to secure a fifth successive home semi-final and, quite possibly, a home final for the third time in five years.

Munster brought plenty of fire and brimstone to the occasion, which had a sense of electricity in the air at the outset if ultimately not quite fulfilling expectations. On a slick surface with a slippery pill, there were too many reset scrums and thus too much of Alain Rolland.


Leinster scrum
In mitigation of the referee, the front

rows particularly and the players in general didn’t make it easy for him. As expected, BJ Botha and company pummelled Leinster’s restructured scrum backwards on three occasions in the first half at such a rate that on one occasion Conor Murray struggled to keep up with them.

Hence, you could understand Munster’s gripe that this superiority was not rewarded more than the nine points to three it yielded in the first half. Leinster’s first three-pointer had been a marginal call against Felix Jones for holding on given Shane Jennings did not release after the tackle, but not for the first time in this fixture, the wily Jennings had a big game. He would also earn three points when holding Tommy O’Donnell down and created the game’s only try.

Rolland was as impatient as everyone else in the stadium that David Kilcoyne and Mike Ross wrestled too much before the put-in, and just possibly, Kilcoyne was a little too pumped up for his own good. But his pivotal yellow card in the 54th minute was as much a case of being in the wrong place at the wrong time, for by that stage Rolland was impatient with Munster for tacklers not rolling away.

The Ians, Madigan and Keatley, landed six from seven and six from six respectively, yet the kicking out of hand generally was notably less distinguished. One exception was Rob Kearney notable for his who brought his composed kicking, counterattacking and usual brilliance in the air. Indeed, in a typically tight and taut derby, Leinster simply had more big plays from their big players.

By half-time you sensed Leinster had weathered the storm and come the hour they had scored 16 unanswered points.


O’Driscoll magic
Brian O’Driscoll not only marked potentially his last Leinster-Munster affair with the game’s decisive try, but in many ways it was his creative touches which lit the

touch paper. This was all the more so because it was O’Driscoll. In the knowledge that is his career endgame, his every touch seems more seismic than ever.

The great one was up for it all right, as was Paul O’Connell, and additional evidence of this was the manner in which Rolland took exception to the disrespectful “language” he claimed O’Driscoll used towards him.

Peter O’Mahony’s loss, after twanging his hamstring in the warm-up, was significant loss Munster. They gained in CJ Stander’s strong carrying, but lost out in O’Mahony’s presence at the breakdown and the lineout, reducing Munster’s options on their own throw and on Leinster’s, save for one superb O’Connell steal.

Meanwhile, as O’Donnell’s influence waned after a strong opening half, so that of Jennings, Kevin McLaughlin and Jamie Heaslip grew.

Despite the threat posed by Simon Zebo and Keith Earls, Leinster had always looked the likelier to breach the whitewash, in part because their defensive structure and organisation was better, whereas for all Munster’s defensive robustness which Rob Penney hailed, with the exception of O’Connell, Munster’s line speed could have been better and will need to be against Toulouse.


Munster recovery
Madigan having hauled them back to 12-all, in part thanks to Eoin Reddan’s clever break off a scrum, there was an inevitability about the ruthless manner Leinster struck within three minutes of Kilcoyne’s binning.

Mike Ross having set up front-foot ball, it was O’Driscoll who ran hard and straight as first receiver at a wilting and drifting defence before Jennings took Casey Laulala’s tackle and off-loaded back inside for O’Driscoll to score.

To the credit of 14-man Munster, they went through 17 phases against a Leinster defence which briefly began to malfunction for Keatley to reduce the lead. Madigan was perhaps fortunate not to be binned after not rolling away after stopping Stander. But opting to make it a one-point game with just three minutes left rather than apply their under-used maul was a back-handed compliment to the Leinster defence.

Ross conceded that three-pointer with a high tackle on Stander, yet the wonder was that he was still able to make tackles at all in the 77th minute.

With that he was hauled off and the much maligned Michael Bent completed his own fairly heroic stint by switching across to tight head to lock the final scrum for Reddan to step over the touch line. That, and much of what went with it, will have given Leinster huge satisfaction.