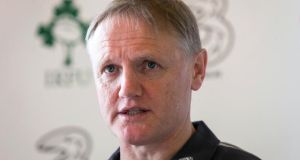 Ireland head coach Joe Schmidt feels that Leinster should be doing better with the international talent available to them. Photo: Ryan Byrne/Inpho

Irish head coach Joe Schmidt says that Leinster should be looking a little closer to home when analysing their disappointing form this season.

The former two-time Heineken Cup winning Leinster coach held a special press briefing on Thursday to challenge the recent “inaccuracies” circulated in the debate over the IRFU’s player management systems.

That mainly being the complaints of the province’s current head coach Matt O’Connor who has been routinely claiming that he has had his best players available to him for just 30 percent of the team’s matches this season.

“I have been on both sides of it and I know that there are always frustrations if you don’t feel that you have a free hand,” said Schmidt when addressing the press.

“The one thing I would say about the evolution of the system is that it’s a lot freer than it used to be.”

“It comes back to how you are managing the players and how well is that working,” he said.

“It’s a challenge for provincial coaches to get the best out of their teams all the time when you don’t always have the top players available.

“If you look at the teams that were put out through those three years those teams are very similar and have international experience, with guys who have been internationally capped. I think from that perspective the system isn’t broken and we’re trying to refine it every quarter.”

The New Zealander also described claims that his former employers had to pick between selecting their key players for Friday night’s game with Ulster, or their encounter with the Dragons a fortnight ago as “unequivocally not accurate”.

“Every quarter we look at it and every week during the Six Nations when you are focused on trying to get results, focused on the players you have got in camp, I’m talking to the provincial coaches and we’re trying to say, ‘Look I can get this guy back to you here’. Is that a little bit of a compromise on behalf of the national team? I do believe it is,” added Schmidt.

“Over the last couple of weeks there have been some inaccuracies in what’s being said and written about the system. A lot of that is obviously attributed to Leinster’s struggle to qualify for the Pro12 semi-finals.

“When you take injuries and non-selection out of it, that they’re available for close on 60 percent of the games that they were fit and eligible for selection and ready for.

“We punch above our weight, we have to look for any advantage we can get over our competitors both to retain talent, to develop talent. So it would be crazy for us to throw away the distinct advantage that we have, that other nations would love to have.

“We’re going to continue to evolve this system. We’re planning on adding more to it with regards to some ideas we’ve got with some more science, in our ability to monitor our players all year round and strengthen it.”