Best, Bowe and Payne back for Neil Doak’s side while Bundee Aki partners Henshaw 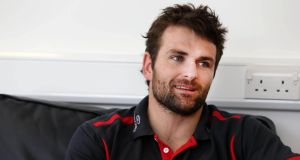 Jared Payne will line up against international centre partner Robbie Henshaw in Ulster’s game against Connacht at The Sportsground. Photograph: Inpho

Bundee Aki returns for Connacht for their Pro 12 clash against Ulster on Saturday while Neil Doak welcomes back Ireland Six Nations winning trio Rory Best, Tommy Bowe and Jared Payne for the tie at the Sportsground.

Best will captain Ulster from hooker, and along with Bowe and Payne is one of 13 Ireland internationals in the visitors squad.

Bowe starts on the right wing and he is joined in the back three by Louis Ludik and the league’s leading try scorer, Craig Gilroy, while Darren Dave starts inside Payne in the centre and Paddy Jackson and Ruan Pienaar take the 10 and nine jerseys.

Iain Henderson, who proved an irrepressible force off the bench during Ireland’s victorious Six nations campaign, starts at blindside flanker, with Chris Henry making his first appearance since heart surgery at openside.

Meanwhile Connacht coach Pat Lam has made three changes to the side beaten 14-7 by Gloucester at Kingsholm last weekend.

The return of Aki means Robbie Henshaw shifts to outside centre, setting up an intriguing battle with international midfield partner Payne, while Craig Ronaldson starts at outhalf.

George Naoupu is the only new face in the pack for Connacht, and Lam said: “We have no doubt that Saturday will be a massive challenge against a quality Ulster side who have been up near the top of the table for the whole season.

“With their 6 Nations stars back they’ll be coming here all guns blazing as they vie for a home semi-final. But we are back on our Sportsground for the first time in six weeks and we’re in a really exciting place in the league.”