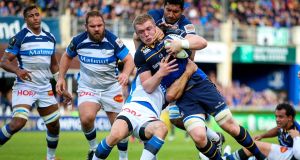 Dan Leavy in action against Castres at the RDS. Leavy, happily injury free, has consistently delivered on his prodigious ability this season. Photograph: Tommy Dickson/Inpho

Leinster coach Leo Cullen will know more about the depth of his playing roster, both physically and in terms of mental aptitude, after tonight’s Guinness Pro12 fixture as the league leaders tackle a resurgent Scarlets.

Occasionally in seasons past, when stripped of the first team skeleton, the province’s performance levels wobbled precariously and matches were lost rather tamely.

Cullen and his management team have addressed those issues pretty successfully but this represents another difficult assignment.

The Scarlets have recovered well after a poor start to the season winning their last five league matches, including a victory over the Glasgow Warriors.

Dan Leavy, Luke McGrath and James Tracy each won a first Irish cap against Canada and should bring that form and confidence into this match; albeit from the bench in the case of the latter pair.

Leavy, happily injury free, has consistently delivered on his prodigious ability this season.

That’s also the case for wing Adam Byrne, who scored a hat-trick of tries against Zebre, and had four in two starts for the province this season.

Barry Daly is another to impress, particularly going forward, thereby giving Leinster a genuine cutting edge on both flanks.

Arguably the young player who has made the biggest impact behind the scrum is centre, Rory O’Loughlin. He has recovered from injury to take his place alongside Noel Reid in midfield. O’Loughlin, even when out of position on the wing, has excelled irrespective of the calibre of opposition.

In the absence of Jonathan Sexton and Joey Carbery, Ross Byrne gets a chance to remind people of his ability, and will be looking to build upon his last performance in a blue jersey.

Ireland international Richardt Strauss starts at hooker, shaking off the cobwebs of long-term injury, in what has become a very competitive position at the province, a state of affairs replicated in the backrow, which houses Dominic Ryan, Leavy and Jack Conan.

The importance of the set-piece cannot be overstated an area in which Leinster’s front five in particular are likely to be seriously tested. The bench contains some academy prospects in props Andrew Porter and Oisín Heffernan (set to make his Leinster debut) and flanker-cum-number eight Peadar Timmins.

Scarlets coach Wayne Pivac is happy with his side’s attitude and application in preparing for a crack at Leinster.

“You don’t get to the top of the table by accident. They have a strong squad and it’ll certainly be a good challenge. We’ve talked a lot about what we want to achieve and what we want out of the game. It’s really focusing on maintaining the small improvements we’ve made over the last few weeks.

“We want to show that to the fans and the people supporting us that it means a lot to the boys to pull the jersey on and playing well over the 80 minutes.”

The home side give a debut to New Zealand wing Johnny McNicholl while included in their match day squad is former Leinster and Lansdowne forward Tadhg Beirne. There is obvious quality throughout the Scarlets, players like Hadleigh Parkes, Rhys Patchell and James Davies to name but three and they will be confident of continuing their good run.

However the same is true of Leinster, and of they can get some front-foot ball then they have the backrow and backs to exploit it.