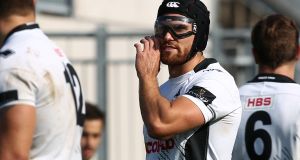 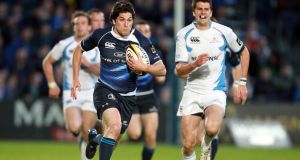 Ian McKinley in full flight during his final appearance for Leinster in 2011. Photograph: Dan Sheridan/Inpho

Cometh the hour, cometh the man. Again. The RDS should witness one of the more poignant and remarkable moments of the season this evening. Everyone loves a comeback, but the anticipated introduction of Treviso replacement Ian McKinley will mark one of the most resilient returns to professional rugby in the history of the game.

As fate would have it, McKinley’s competitive Treviso debut is on the ground where he made his last league start for Leinster. That was in February 2011, ironically against Treviso, when the then 21-year-old outhalf scored a try in a man of the match performance.

Unfortunately, at the end of that season, McKinley was forced to retire after losing the sight in his left eye. This was the result of a horrific accident in an AIL game when playing with UCD in January 2010.

“It has really come full circle,” McKinley tells The Irish Times. “If you said this day would happen you couldn’t script it. But you take what you are given; the hard work has paid off and hopefully it will come into fruition in the game because there’s no point in just talking about it. You’ve got to put it out on the field and perform.”

There would be only one more appearance for Leinster – as a replacement in the home win over Glasgow that May – before he was forced to retire.

He needed to get away and Leinster, to their credit, set him up with a coaching job at Italian club Leonorso in 2011.

Along the way, Leinster also organised a surprise 22nd birthday party for him in December 2011, as well as giving himself and his fiancee Cordelia a holiday voucher.

Yet he admits “the lowest point was probably when I moved over to Udine, within the first six months. The realisation hit me when there was a game between Leinster and Wasps,” he says, in reference to Leinster beating Wasps 48-28 in the Challenge Cup quarter-finals. “I didn’t see it but I read the reports and a lot of the guys I played with performed really, really well. It just hit me and it was very, very hard to take.”

It was then he thought that if there was any way of playing again, he should explore it; this realisation also struck his older brother Philip upon visiting McKinley in Udine at that same time in April 2013. Philip rang a friend who helped him contact the National College of Art and Design with a view to exploring the possibility of developing protective eye goggles.

McKinley’s parents, Horace and Pam, have been given VIP tickets to tonight’s game by the Leinster Branch, and as well as the latter, McKinley readily acknowledges the debt he owes his family, and especially his fiancee Cordelia and older brother.

“Philip has been the driving force behind everything and he deserves just a huge amount of credit for his work and his passion. But everyone has done their bit.”

In this he includes the 13,000 people who signed a petition campaigning for the IRFU to reverse their opposition to World Rugby’s trialling of McKinley’s protective goggles. Helped by his own presentation to the IRFU in January of this year, the union relented in their stance. This - meant Treviso could sign McKinley, as otherwise he would have been ruled out of all their Pro12 games in Ireland.

Indeed, the story of the goggles is almost as epic a journey as his own comeback. With the RFU making an exception in the case of McKinley, only the French – forever operating in their own unique bubble – have yet to sanction World Rugby’s trialling of the goggles. Hence he will not be able to play Treviso’s Challenge Cup games away to La Rochelle and Bayonne.

After that first game back for Leonorso (“because it was going into the unknown”) other landmark games were playing for the Barbarians against Heriots last season – both were celebrating their 125th anniversary – and playing in Ravenhill for Ulster last March, his first game in Ireland since 2011, and with his family in attendance.

“Growing up watching games like the Baa-Baas against New Zealand, they’re the matches that inspire you to play the game. I still have the jersey hanging up at home, unwashed! And it will remain there for a long time.”

All told, McKinley played three games for Zebre, including 80 minutes at home to Leinster, and Girvan Dempsey spoke glowingly yesterday of how McKinley was at the top of his game that day, which is remarkable given he has almost had to re-invent his game. McKinley has monocular vision, and being a left-footer, losing his sight in his left eye has forced him to develop new ways of catching, place-kicking and tackling, by using his other senses.

As something of a pioneer for the Ralieri goggles and mindful of the estimated 500 or so players who use them globally in underage rugby, McKinley’s work is not done yet, not least in France.

“It was incredible to read them, and also incredible to meet some of them,” he says. “Safety is a huge priority within rugby now, with it becoming more physical every year, and the worries about concussion. Rugby has a bad rep when it comes to concussion and rightly so, because there’s been a few horrendous stories, so if these goggles can bring a positive light into the game and ease worries that parents might have, then that’s another reason to keep playing with them.

“Like I’ve said, I wouldn’t be playing with them if I didn’t feel safe, because I’m not willing to risk anything happening to my good eye. That’s why I first played in the lower levels of Italian rugby and every level I’ve gone up they’ve been fine. I’ve played nearly 60 games now with these goggles at various levels, so I believe a young player can play with them without any risk.”

McKinley owes Italy and Italian rugby a huge amount as well; he qualifies for the Azzurri in January through the residency ruling. Initially though, he is purely focussing on taking his game back to a decent level by playing regularly in the Pro12 and helping to revive Treviso.

“That’s something I haven’t done for five years, and that starts here. It will be strange but we believe we have a very good chance of winning and opening up this competition and starting on the front foot. We’re very, very excited about it and I’m obviously very excited.”

A sports mad product of St Columba’s, who also played Gaelic football with Kilmacud Crokes alongside Ian Madigan (they and their families have remained very close), rare was the day that the talented McKinley wasn’t kicking and running with a ball in some shape or form.

He looked destined for great things when outhalf on an Ireland Under-20s team at the Junior World Championships in 2010 in Japan which featured Peter O’Mahony, Conor Murray, Jack McGrath, Rhys Ruddock, Matt Healy, Madigan and others.

“I realise I’m very lucky to live in a pretty good country where the weather is a bit better than Ireland, where the food is maybe a bit better, and I’ve learned a new language and new culture, and I’m very grateful for those things.”

Quite why he refused to accept his career was over is testament to his resilience.

“Some might say it’s stupidity or lunacy,” he says good-naturedly, “but there’s a huge difference between getting a serious knee or shoulder or spine or neck injury, like Felix Jones and Luke Fitzgerald. They are very serious injuries, which prevent you from tackling or performing, whereas the rest of my body parts are all perfectly fine. I have this one little piece that doesn’t work but you can certainly overcome it.

“And if you can play with some form of safety protection, then it cancels out any doubt you have in your mind. I feel I have a lot more to give and I know once I do retire that at least I gave it my best shot, and I can be happy with that.”

It has been a long journey, and there’s plenty of road still to travel.