Connacht will have to respond when backs are against the wall 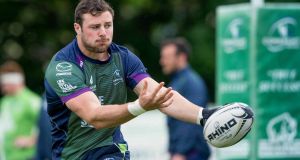 Connacht’s Robbie Henshaw will want a big game in his farewell to the Sportsground. Photograph: Morgan Treacy/Inpho

In outlining their vision and strategy for the next four years in midweek, Connacht took the aims of the six clubs which founded the organisation in 1885 as a starting point. Little has changed in that regard, they stated, but in hosting their biggest match day in the intervening 131 years today, all has changed, changed utterly.

So today there is no tomorrow. Their strategy this season, indeed since Pat Lam arrived, has been to die with their boots on and regardless of the forecast – the worst of the afternoon downpour may have abated – they will, he proclaimed, have to “fire bullets”.

With their scrum having survived all manner of disruption two weeks ago, and Ally Muldowney there to harness lineout possession in his farewell home game, be it the sniping or set moves off Kieran Marmion, the impressive carrying of AJ McGinty, the inspirational Bundee Aki or their back three who have an the eye for a gap, they should have both the bullets and the gunpowder.

And then there’s Robbie Henshaw, who will surely want a huge game as his farewell to the Sportsground.

They didn’t fire too many two weeks ago, but still ended the holders’ nine-match winning run and eight-match winning streak against Connacht, by digging deep defensively, keeping their heads and taking two of the chances that came their way.

Critically, their defence has tightened for the business end of the season.

In theory, it should be twice as difficult to beat the champions twice running, but then again Connacht have earned a semi-final in their bear pit.

They have to have a better chance than if they’d lost yet again to Glasgow for a ninth time in a row two weeks ago and were facing a Warriors team with 10 wins on the bounce in Scotland.

They will also take heart from having eventually, to some degree, curtailed the almost unstoppable Leone Nakawara’s running and offloading game, and having rolled with Glasgow’s early punches in each half and, as against Munster, worked their way back into the game,

“There is no doubt we are going to be under pressure and that’s where your relationships, your cultures, come into it,” said Lam.

“There’s no doubt possibly at times we might be behind. But we know how to get back into it. So all of those learnings come into these games because one off, you lose. You’re gone when you are not in a big final.”

Lam has little doubt his players can go to the well again on such an occasion. “We’ve gone to that well quite a few times this year. The Treviso game was one we identified straight away, we didn’t go to that well that day and that was a perfect lesson to have going into that Glasgow game and these next games coming up.

“If we don’t go to that well, then we will be an average team. But if we can use our game and dip into the well of excitement and energy, which was in bucketloads the last time, that’s going to be the key for us.”

Lam promotes Eoin McKeon, with Seán O’Brien reverting to the bench, where he is joined by Andrew Browne, in place of Quinn Roux. In response to that defeat two weeks ago, Gregor Townsend makes – for him – a relatively modest five changes to his starting line-up.

As if to underline the quality of their strength in depth, the quintet are all full internationals, namely the Scottish quartet of Sean Lamont, Mark Bennett, Henry Pyrgos and Zander Fagerson, along with Italian flanker Simone Favaro. Ryan Grant, D’arcy Rae, Adam Ashe, Duncan Weir and Taqele Naiyaravoro are also called up to the 23.

The smart call is Glasgow. They have as much firepower, and perhaps more off the bench, as well as a more developed offloading game. But the raw emotion of the occasion comes into it too, and you know that over the 80 minutes Connacht team and crowd alike will not go away.