‘I’m excited by the type of rugby being played, I hope I can come over and add something’ 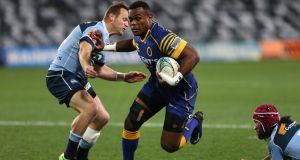 Connacht have announced the signing of Fijian-born back row forward Naulia Dawai on a two year deal. The 29-year-old, who joins Connacht on the back of three seasons with NPC-side Otago in New Zealand, was capped for Fiji in June 2016, starting three tests against Tonga, Samoa and Georgia.

Born in Fiji, Dawai moved to New Zealand in 2011 to play club rugby with Southland. He played 7’s with the provincial side before breaking into the 2013 ITM Cup team where he made nine appearances. A year later, he moved to Otago and emerged as a regular in the 2015 ITM Cup campaign. In September 2015, Dawai scored three tries against Auckland, becoming only the fourth player in NPC history to score a hat trick at Eden Park.

Connacht head coach Pat Lam explained that the new signing can play anywhere across the back row.

“Naulia is an exciting addition to the Connacht Rugby squad as he brings X-factor to our hard-working forward pack. He can play across the back row, which is a great boost to our options up front and also provides vital depth and competition in those positions.

“We were really impressed with the rugby Naulia’s been playing in the NPC and also with the Fiji national side during the summer. When Otago Head coach and good friend Cory Brown (a former coach at Connacht) confirmed to me Naulia’s work ethic and ability on and off the field, we were very pleased to secure him for Connacht Rugby.

“We’re all looking forward to welcoming Naulia and his family to Connacht in the next few weeks and bringing him up to speed on everything on and off the pitch.”

Speaking from New Zealand, Naulia said he is looking forward to arriving in Ireland for the first time -

“I’m extremely excited to get to Ireland and take up this wonderful opportunity with Connacht Rugby. It will be my first time in Ireland and indeed Europe but it’s a challenge I am really looking forward to.

“From speaking to Pat (Lam) and watching the Connacht games, I am excited by the type of rugby being played and I hope I can come over and add something as well.

“I’d like to thank all the coaches at Otago and particularly Cory (Brown). I feel truly blessed to have this opportunity for myself and my family.”

While Connacht Rugby CEO Willie Ruane added: “We’re pleased to welcome Naulia to Connacht Rugby and believe that he has the talent and determination to add to our squad in what is an exciting season for us.”

Connacht use visit of Benetton to give as many players as possible match time 20:51
Celtic surrender two goal lead in AC Milan defeat 20:16
Fans told not to excessively sing or hug as Premier League crowds return 20:02
Gillane’s chances of playing against Waterford rated ‘50-50’ 19:20
Aaron Gillane an injury doubt for the All-Ireland final 19:13
Here is your handy guide to sport on television this week