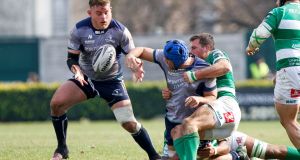 Connacht’s late charge in the Guinness Pro 12 gained more momentum with a bonus-point victory over Benetton Treviso at Stadio Monigo on Sunday.

Avenging last season’s loss at the venue, the Pro 12 champions had the bonus point wrapped up by the 60th minute when fullback Tiernan O’Halloran celebrated his 26th birthday with the fourth try to extend their winning run to three and close the gap on seventh-placed Cardiff to three points.

“Really happy with the outcome,” said coach Pat Lam, “but performance is the key. We did some outstanding moments, but to give away three soft tries was disappointing.

“Jimmy Duffy [forwards coach] put some extra work in this week with the pack, and it certainly paid off. We scored some really good tries, and to get that five points was good, particularly after blowing it last week – good maturity from some of the young guys, and it will give us confidence heading into a short week before Zebre.”

Connacht led 20-5 at half time courtesy of two Craig Ronaldson penalties and tries from scrumhalf and man of the match Caolin Blade and Ireland prop Finlay Bealham, with Ronaldson converting both.

Although Treviso’s left wing Andrea Buondonno replied before the break, Connacht sealed victory with two tries by the 60th minute – Ronaldson pouncing on Jack Carty’s deft grubber and converting before O’Halloran completed the scoring, with Carty adding the extras.