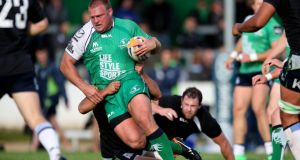 Nathan White: back in the Connacht line-up for the visit to Scarlets. Photo: James Crombie/Inpho

Sunday’s match in west Wales has huge ramifications for this season’s Guinness Pro12. The Scarlets, who trail their visitors by five points, know that only a win will suffice if they want to nurture ambitions of a place in the top six in the table at season’s end.

Conversely Connacht will be primed to try and forge a win against one of their closest pursuers and open an even greater gap. The absence of Eoin McKeon (sternum) and Mils Muliaina (knee) through injury is offset by the return of a trio of long-term injury victims. Tighthead prop Nathan White and flanker Jake Heenan are named in the starting team while Tiernan O’Halloran is included in the replacements.

Connacht coach Pat Lam daid: “What we see with this team are the huge opportunities up for grabs for so many young players. The likes of Shane O’Leary, who has worked hard in training and for the Eagles, has his first match day involvement and we’re delighted for him.

“This is a huge game for us against a well-coached and quality side in Scarlets. We know they are right behind us and like us, they have top-six aspirations. We haven’t won on their soil since 2004 and we’ve never won at Parc y Scarlets.

“We’ve challenged ourselves to take it to another level for this block of four games, and it must start with a performance this Sunday.”

Scarlets have seven players on international duty with Wales but still possess plenty of quality with international hooker Ken Owens leading the team. Coach Wayne Pivac said: “Connacht is a team sitting in the top six which is where we want to be.

“Pat has got some players in who’ve made a difference to the side and the local guys have all stepped up. They’re a definite threat to the top four and top six. We were disappointed when we went out there and lost 14-8. It was a game we could and should have won.”

Laytown beach races cancel September meeting due to coronavirus 16:24
Racing regulator happy with screening protocols despite high-profile breaches 15:50
McNamara hopeful that Ireland under-20s will get to compete for Grand Slam 15:32
GAA dressing rooms to remain closed until further notice 12:10
Aidan and Donnacha O’Brien banned from racecourses for Covid-19 breach 09:49
Here is your handy guide to sport on television this week