Chris Henry back to bolster Ulster’s challenge against Zebre 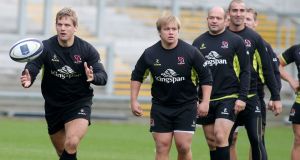 Chris Henry is a welcome addition to the Ulster team, returning following shoulder surgery to play his first game since the Guinness Pro12 semi-final defeat to Leinster last season.

The 32-year-old flanker is named in a very combative and athletic backrow that includes Clive Ross and Sean Reidy. Whatever the collective noun for flankers, may be – perhaps “a pilfering” – they should wreak havoc at the breakdown.

Luke Marshall was released from Ireland training camp and starts in the centre, while Craig Gilroy, another in Carton House during the week, is named on the bench. Louis Ludik, a standout player for Ulster this season, returns after injury.

Tommy Bowe continues to rack up the game time while it’s good to see Jacob Stockdale being given an opportunity to play alongside the outstanding Charles Piutau.

Ulster coach Les Kiss can call upon a strong bench that includes Irish internationals Dan Tuohy, Robbie Diack and one of the best young prospects in Irish rugby in Rob Lyttle.

Zebre won their first match of the season last time out, a brilliant away triumph against Edinburgh but have never prevailed in successive matches in the history of the tournament.

The Italian side are without 12 internationals required for duty with the national side that takes on Tonga, in Padua, and as a result, have had to call up six permit players from the domestic Italian league.

This is the perfect setting for Ulster to reignite their season that has stalled somewhat recently in winning just one of their last five matches in all competitions including suffering a defeat against Munster, for the first time in seven matches at the Kingspan Stadium.

The usual rules apply when facing an Italian team, win set-piece ball and Ulster have enough clout behind the scrum to inflict serious damage on the scoreboard.