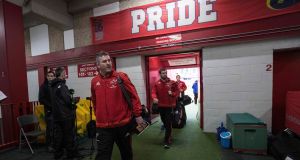 Not many dreams or songs to sing as low-lying Munster barely remain among the European elite for next season.

Anthony Foley has been an unlucky coach and must now find a way to work with Rassie Erasmus. A valid argument he made in the aftermath of Munster’s worst campaign in the professional era was just how many “marquee” players were stripped from his squad.

Foley name-checked every one of them: captain Peter O’Mahony missed every single game, while four of their five foreign recruits – Mark Chisholm, BJ Botha, Tyler Bleyendaal and Gerhard van der Heever – were crocked for long periods. Felix Jones retired prematurely due to a neck injury, while Donnacha Ryan and Denis Hurley barely featured. Even releasing James Coughlan, Donncha O’Callaghan and Paul O’Connell from their contracts was mentioned.

Plenty of excuses. At least Munster will return for pre-season this summer as a Champions Cup team. What’s also guaranteed is a viciously tough European pool.

Foley rejected the opportunity to provide clarity on how his redefined role as “head coach” will dovetail with the newly invented, and “track-suited,” Munster director of rugby.

“No, I can’t on the grounds that I haven’t spoken to Rassie yet. Until that happens there isn’t any point.

“I just want to coach and hopefully that is what will happen and that is what is there to happen. Until I have spoken to the man, sat down and pressed flesh with him, I can’t really say a whole lot about it because there isn’t really a whole pile to say. You can take out of it what you want.”

Basically, Munster will go through an easily avoidable summer of conjecture. “I’d like to be coaching here in 20 years’ time,” Foley added when pressed. “I don’t have a desire to go anywhere else. I’m not going to try and will myself on him. It’s about us and the team he wants, the management and the group around it making sure everyone is on the same page.”

Surely Foley has made himself aware of the qualities Erasmus – de facto Springbok coach at two World Cups – will be bringing to Limerick?

“One hundred per cent, yeah. I’ve said on numerous occasions it’s great work by [Munster CEO] Garrett [Fitzgerald] and the PGB [Professional Game Boards] to get the job done as quick as they could because when I asked the timeline around it they said six weeks or six months; they wanted to get the right person. A fellow of a high calibre in. Hopefully it works out for him.”

CJ Stander, coming off a brilliant season captaining Munster through dark times yet consistently producing world-class performances, is perfectly placed to see how Erasmus and Foley can form a workable coaching unit.

Stander trained with South Africa before the 2011 World Cup and alongside Foley ever since.

“They will be able to work together for sure. You don’t even have to think about it, and I think for Axel and Rassie, especially for Axel, who is the heartbeat of Munster, he will work with anyone if it is good for the Munster jersey.”

Time will tell but next season cannot possibly be as bad as 2015/16 when the contributions of young players like Johnny Holland, Rory Scannell and Jack O’Donoghue helped to ensure Munster avoided the worst possible fate.