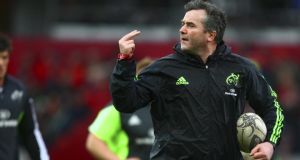 Munster head coach Anthony Foley has done a good job with the players he has to work with but next season will bring a lot more pressure. Photograph: Ken Sutton/Inpho

I see John B Keane’s The Field opened in the Gaiety last night. God made the world, but we made the field.

Certainly as grouchy as the Bull McCabe, although John Hayes is more deserving of the nickname, Anthony Foley remains a cult hero down Munster way.

In a nutshell, that’s the difference between Foley’s plight and that of Matt O’Connor at Leinster this season. It won’t keep the wolves from the door forever but the native coach tends to be given more leeway to rebuild his squad.

In another way I think we are harder on home-grown coaches in Ireland, turning on them quicker, perhaps because we think we know them. People see them down the shops or wherever. There’s a familiarity that can breed contempt.

The same goes for Foley’s lieutenants Mick O’Driscoll and Jerry Flannery – long and distinguished servants in Munster red. Ian Costello is known from his work with UL Bohemians. So too Brian Walsh with Cork Constitution. All men who have dug the rocks out of Munster rugby and are making a living of it now.

Can Munster’s fully indigenous coaching ticket work? Of course it can but on this island we must still make use of foreign experts be they on and off the field. No need to shun the yank.

That Les Kiss will head up Ulster’s coaching structure made up of former players from November tells us they still need a foreign expert, albeit an acclimatised one, in Belfast. Kiss seems a logical replacement for David Humphreys.

We look to New Zealand enough for players and tactical gurus so it’s no harm to see how they funnel coaches through their system. It starts, like here, with their schools. Joe Schmidt and Graham Henry were teachers once upon a time. Next comes coaching the club and on to the national provincial system and then, when faced by the Super Rugby bottle neck, they are encouraged by the NZRU to further their education in Europe.

All Black head coach Steve Hansen has followed a similar pathway. Know thy enemy being the obvious thinking.

We are doing something similar, just not via some great central master plan. It is encouraging to see former players such as Tom Tierney coaching Cork Con and the Ireland women while Denis Leamy is doubling up with Rockwell College and Clonmel RFC but the route into professionalism requires a move overseas.

Going straight from playing or coaching in the AIL to head coach of a province is too great a leap. Experience must be sought elsewhere; basic stuff such as learning how to communicate with professional players or coping with the inevitability of failure.

Bernard Jackman and Mike Prendergast are leading the way at Grenoble with Ronan O’Gara quietly polishing his coaching IQ at Racing Métro. Mark McCall and Conor O’Shea are different in that they are established in English rugby but all these men must, eventually, come into consideration for provincial coaching positions in Ireland.

Going abroad certainly provides more scope for an actual career. The head coaching position with your native province always has the potential to be a poisoned chalice. If it doesn’t work out it’s hard to see the next job as anything but a demotion. McCall is an exception to that rule having recovered from a disappointing Ulster tenure by quickly rising to director of rugby at Saracens.

The role will only become more demanding as the national team’s success, which the IRFU unashamedly prioritise as it’s their cash cow, continues to impact heavily on provincial progress. We’ve seen it across the board this season and the World Cup will only place further strain on three of the four squads.

Supporters will continue to demand more as well. It has become the norm. I remember there used to be a bit more empathy after a poor performance. Such patience has worn thin nowadays.

But Foley’s first year at the helm, if you accept their Champions Cup pool as an insurmountable obstacle, is working out pretty well so far. Especially considering the disastrous start.

It may still end in failure. Lose at the Kingspan Stadium the weekend after next and they will probably be forced back up to Belfast for a semi-final. Still, after being well beaten by Clermont and Saracens, the Munster response has been impressive. The Ospreys performance was disappointing but otherwise they have shown genuine resilience. That seeps down from the coaches.

It’s no secret that Munster, more so than Leinster and Ulster, are going to struggle to compete in Europe unless they strengthen their squad. Saturday’s match at Twickenham merely reinforces the evidence that rich French clubs will continue to hoard European silverware.

The Pro12 title must be won for anything positive to be salvaged from a campaign that has been cursed with problems. The same applies to Ulster. Internal strife in preseason was followed by unprecedented injuries. Munster even lost Damien Varley to enforced retirement. Paul O’Connell might be next to go post-World Cup.

This wasn’t an ideal time to take the Munster job. But when is? Imagine following Schmidt at Leinster or Humphreys at Ulster. Foley felt he had paid his dues. He wanted the job.

It has not been a bad season. Not yet anyway. Look at the Pro12 table and you’ll see that Munster have the best points difference in the league (+191), the most tries scored and least conceded (59-25) and currently lie in a home semi-final spot. They are in an ideal position coming off the last bend, perfectly teeing up matters for the Ravenhill meeting.

Overall, Foley has done a good job with the players he has had to work with. The biggest disappointment, even factoring in Champions Cup results, is the loss of JJ Hanrahan to Northampton. That was a blow. Hanrahan was yet to deliver on his rare talent but Munster shouldn’t be losing a young player of his calibre.

At least the reaction was impressive. Francis Saili is world class and I hear only good stuff about Tyler Bleyendaal in training. These men must deliver if Munster are to compete at the elite levels of European rugby because the lack of international quality in midfield has been their major problem for some time.

The presence of these two Kiwi’s should allow Munster to return to their traditionally direct ways but in a modernised fashion. Much of their best play of late has been via the maul. CJ Stander and Tommy O’Donnell have got tries but that’s not enough. Certainly not for the road ahead.

Next season will bring a lot more pressure on Foley along with expectation for Munster, and Ulster for that matter, to produce more cohesive performances.

This season’s not a write off just yet. Unfortunately one indigenous coach will deny the other a shot at the only success left to an Irish province in 2015.