Playing for two masters at the Aviva 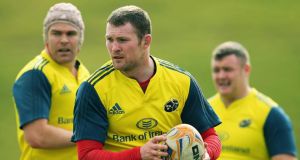 Having already missed out on a Six Nations championship medal, Donnacha Ryan will be further disappointed that injury also keeps him out of tomorrow’s Munster-Leinster clash at the Aviva Stadium. Photograph: Cathal Noonan/Inpho

The first time I played in a Munster-Leinster derby was back in school. I was 16 years of age. With only two big representative games before Irish Schools selection this game was crucial. A breakthrough would open a door into a world of representative rugby for those lucky to be selected on their school’s provincial team and then luckier to be on a performing team.

That first game against Leinster was both bizarre and brilliant. We were led by David O’Mahony and were literarily introducing ourselves before going onto the pitch, such was the Cork-Limerick divide!

Provincial rivalry is a little like the rivalry in Limerick clubs: if it wasn’t inbred in you through family connections it was beaten into you.

The grudge factor was paramount. The focus was twofold: firstly, the need to win (and shove it up them!) and secondly, that win would enhance enormously chances of Irish Schools selection.

As the journey continued on into the Munster U20s and Munster senior ranks this fixture never lost that double edge, as winning was crucial to Ireland U21, A and Senior squad selection.

In 1995 I played on the Munster senior team alongside my brother Brian that “welcomed” Leinster to Thomond Park.

Much has changed over the years, not to mention the advent of professionalism. Talking to those in the youths/schools structures, the advancements in so many aspects from my day are clear.

But for the sides meeting Aviva tomorrow, what has really changed?

Many agendas were at play in that Munster dressingroom 19 years ago, but all revolved around winning and the consequences of winning.

Opposite man
If we players were truly honest, we were more than conscious of our opposite man. Remember, with only one game against each other a season a poor scrummaging performance could kill a prop for an Ireland season; one dropped ball at fullback or one missed tackle by a winger, likewise.

Preparation time and coaching structures were limited so systems were hard to come by, hence the interest I had in Rob Penney’s discussion with Newstalk’s David McIntyre during the week.

Professional players are fundamentally selfish in that they make countless sacrifices to achieve their aim of success. But the beauty of team sport is this selfishness, when harnessed, is a powerful tool the team uses to achieve its goals. How does a coach find the balance?

Essentially, those with Irish aspirations are serving two masters, provincial and national, which provides a very interesting trinity.

I was once told by an Irish selector ‘not to worry about what’s going on in Munster’, the inference being they were up to speed with how I was playing. This, of course, is dangerous territory and open to the vagaries of chance.

The modern environment has changed immeasurably but how is Joe Schmidt to judge those Munster players he is less familiar with? Tomorrow is that time as they are benchmarked against those he is familiar with.

As Penney rightly stated: ‘If they want to be entering Joe’s thinking, these are the games where you can make your mark by staying in systems, staying in frame work . . . and being part of a group that’s doing really, really well’.

Paul O’Connell’s impact for Munster and Ireland has not diminished regardless if he’s on the wing for Munster or at the heart of it for Ireland. But for players such as Tommy O’Donnell, Dave Kilcoyne, James Cronin or indeed Simon Zebo, the jump between systems may be too much for Schmidt to accept/understand.

Schmidt’s system
The fear for the player is thus: is our system capable of delivering that performance and secondly, is the system preparing me for Schmidt’s system and the opportunity to shine for Ireland?s

Both coaches need to be in total agreement with the difference and how this may affect the player’s future selection possibilities.

Hence a real trust and working relationship is required between the provincial and Ireland coaches. This did not always exist in the past and players were the ultimate losers. Hence the player must trust the provincial coach hugely. If not, players may panic in an effort to satisfy both masters. Fascinating.

Leinster’s battle-hardened warriors from the Six Nations have a major advantage in being match fit. But Munster have an advantage too. They have had a run of games (at a lower level) to enhance the Penney systems and to prepare uninterrupted for the Leinster and Toulouse games.

Which is more advantageous?

Tomorrow we’ll see that the only real change in this fixture over 25 years is the massive increase in regularity of opportunity to impress the Ireland coach; nothing else!

I’m so disappointed for Donnacha Ryan. Injury has robbed him of a Six Nations championship medal and has impacted on his Ireland ambitions. Devin Toner has really grown into a vital Irish secondrow and others have popped up.

Iain Henderson is a future great secondrow. On the flank, Ryan’s other slot, Stephen Ferris is back and Peter O’Mahony has been awesome.

Seán O’Brien will return, with the very talented Tommy O’Donnell playing catch up on a superb Chris Henry. Hence missing out tomorrow will be a huge blow to Ryan. How must he be feeling?
liamtoland@yahoo.com