Pienaar on longlist for player of the year

Five players from Irish provinces among contenders for ERC prize 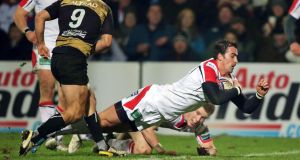 Ruan Pienaar is among five players from Irish provinces included in a longlist announced today for the ERC European Player of the Year 2014 award.

Pienaar, who scored all 22 of his side’s points against Leicester last weekend as they ended their pool campaign with a 100 per cent record, is the only Ulster player named.

Munster have two players nominated, as do Leinster, with Paul O’Connell and Peter O’Mahony getting the nod for Rob Penney’s side.

Cian Healy and Sean Cronin are the Leinster players included.