Ronan O'Gara was named today as the new ambassador for 'Ben's Beginners' which is a programme that promotes healthy cooking for Mums, Dads and kids. Video: Enda O'Dowd 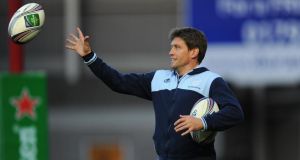 Racing Metro kicking coach Ronan O’Gara: “Nowadays there are internationals who are average, so that signing an international doesn’t really mean that much.” Photograph: Stu Forster/Getty Images.

Casting his eye across the European rugby map from his Parisian employers Racing Metro on a flying trip to Dublin yesterday, Ronan O’Gara admitted the Top 14 had become a financial monster. What’s more, these may not be vintage times for the provinces, but he believes they will remain competitive in the European Champions Cup.

“France is becoming a monster, definitely,” he admitted. “You look at the budgets in the ProD2, you look at the budgets in the Top 14. Choosing players or signing players is still of the utmost importance. Nowadays there are internationals who are average, so that signing an international doesn’t really mean that much. You need to know what you’re signing, and I think that’s crucial to Toulon. They have signed players with exceptional drive.

“It obviously helps that the big benefactors are there but in Ireland I don’t think that anything has changed. You’ve three or four teams, and then there’s Team Ireland, and they’re spread out around Ireland and for European Cup games I think the provinces will always be strong, and I think we’ll see that.”

Hence O’Gara struggles to nominate a winner of this season’s Champions Cup, and doesn’t see a third successive Toulon win as a fait accompli given French volatility.

“Toulon are improving but some of the rugby Clermont have played at times has been exceptional. Can Saracens make the final step? I think Northampton are a small bit like Munster in terms of their journey. They’ve had serious recruitment and Leinster, Munster and Ulster will definitely feature. I’ve no doubt about that. There’s too much pedigree there.”

“Maybe that’s me with a little bit of the grass is always greener when you’re finished, but I think when you look probably the options in the back row for Munster as opposed to what they had over the last 10 to 15 years, perhaps the strength in depth isn’t there and that’s an area of huge importance.

“But their 1 to 15 is very good,” said O’Gara, adding how crucial the Munster crowd can be, especially at Thomond Park. “You can’t expect it to be there for Guinness [Pro12] games because that’s the mentality in Munster, but there will be a different animal released for the European Cup.”

Looking at Leinster, he noted: “If you cast back your mind to the build-up to the Leinster-Munster game, I think Leinster thought Munster were finished. That was the perception around Ireland. That Munster aren’t at the races. If people are being honest, that’s what it was. And they (Leinster) got hosed.”

While anticipating a reaction from Leinster, he added: “It’s not the same Leinster without Sexton, Nacewa and O’Driscoll. Put those three players in the team and they’d make a hell of a difference.”

As with Munster, O’Gara said Ulster’s “massive support” would make them hard to beat at Ravenhill, that Ruan Pienaar remained key, while Paddy Jackson was “getting better every season” thanks to the backing of his coaches, and their retinue of leaders was epitomised by Rory Best. “From playing with him I know him inside-out and you can take it for sure that everything from one to eight will be highly organised and highly ruthless.”

O’Gara admitted he would be sorry to lose Sexton from Racing next season as both a friend and a player. “There aren’t many world-class outhalfs in the world. There aren’t many particularly good outhalfs in the world either. So it’s disappointing for me and for Racing but I think he’s making the right move. He’s a top player in Ireland and, hopefully, you get 12 years playing at that level, maybe 15 years. It’s a small period in your life and you should be playing for your home team if it’s possible.”

Sexton is as “difficult” as himself, so they challenged each other. “He’s exactly what you want as a young coach. When he gets into match mode, or Johnny mode – he snaps in videos too – he talks. So as a rookie coach, it’s good because he’s not going to just be a nodding dog.”

While O’Gara hopes to return a better coach one day, he’s in no rush home. “No, I don’t want to come home. Because if you come home you’re coming home for a reason and there’s no reason for me to come home because I have so much learning to do. I’ll be away for years.”

That said, he stressed that he and Jessica and their five kids live in the suburbs, not in Paris. “It’s not romantic, it’s not flash, it’s very, very basic. As I say to Jess, we could be anywhere in the World. Because you don’t have much time to do anything when you have five kids.

“And I coach, so it’s work, home; work, home. You know what I mean? It’s quite a boring life but that’s the way kids are. They’re dependent on us and when there’s five of them you don’t have much choice.”

nIreland Rugby legend, Ronan O’Gara is leading out the Ben’s Beginners programme, which seeks to encourage Irish mums and dads to get cooking with their children, and nurture a lifelong love for wholesome food.