O’Connell indicates support for Foley as next Munster head coach 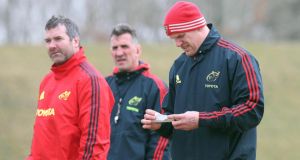 Having recovered from the initial “shock” of hearing Rob Penney is to leave Munster, Paul O’Connell yesterday put his significant weight behind Anthony Foley becoming the province’s head coach next season.

News of Penney’s refusal to take up a one year contract extension broke just before O’Connell flanked Joe Schmdit for the announcement of the Ireland team to face Wales tomorrow.

Penney is to take up a coaching position in Japan but, unprompted, O’Connell mentioned Foley as the players choice for a job he missed out on two years ago.

The 40 year, capped 62 times by Ireland at number eight with 208 appearances for Munster, has been forwards coach under Penney.

Foley was also the national defence coach with Declan Kidney and took charge of the Wolfhounds for the 14-8 victory over the England Saxons at Kingsholm last month.

“I haven’t given it a lot of thought but I presume Axel (Foley) will put his hand up there,” said O’Connell. “He has spent a lot of time waiting for the opportunity.

“If you mention a name you are giving them your backing. Anthony has worked with a lot of coaches now. I think the time in the Irish set-up over the last few years probably helped, and his time with Laurie Fisher and Tony McGahan would have helped him a lot as well.

“I don’t think there would be any complaint from the players if Anthony got it but the position we are in in the league and the Heineken Cup and considering some of the young guys coming through in the squad means there would be a lot of interest for the job.”

If Foley is the ready made, home-grown Munster coach in waiting then Ian Costello is a ready-made, home-grown assistant/backs coach. Another member of Penney’s backroom team, Ireland international centre Lynne Cantwell, in these pages yesterday, said Costello was the best coach she has ever encountered.

Ronan O’Gara has also made no secret of his desire to coach Munster some day but he’s only in the first of a two year deal at Racing Metro 92.

But there’s a Bull McCabe feel to all this. There was certainly plenty of resistance to Penney’s attempts to alter Munster’s out-dated playing style by introducing the Canterbury way of playing.

Throughout the Penney era, short and all as it will now be, both himself and Mannix were based in Cork while Foley and Costello were on site at the University of Limerick.

For certain it won’t look too bright a move by the decision makers if he guides them to European and/or Pro 12 success in May.

On his arrival in August 2012 Penney surveyed the landscape before revealing it would take a minimum three, yet ideally five, years to return Munster to the status of preeminent force in European rugby.

Despite reaching the Heineken Cup semi-final last season and securing a home quarter-final against Toulouse this year, while currently standing atop of the Pro 12 league, chief executive Garret Fitzgerald deemed a one year contract extension a sufficient reward for the Cantabrian’s achievements.

“The terms and conditions of this extension had been agreed by the Munster Professional Games Committee and the IRFU but Rob has since attracted the interest of another club and there are terms on offer that are in line with Rob’s long-term needs,” read a Munster Branch statement.

O’Connell, who along with Donnacha Ryan and Conor Murray recently signed deals to remain in Ireland, was asked if Penney’s situation impacted on that decision making process.

“I think Rob leaving doesn’t make a massive difference. I think a lot of the bits around my decision to stay are still firmly there.

“You’d love to think and I hope Anthony would remain, whether it is as head coach or forwards coach. I suppose he is one of the main guys I would have worked with the most in Munster.

He added: “Hopefully now Munster can put something in place fairly quickly that will continue the improvements that have happened under Rob in the last two years.”