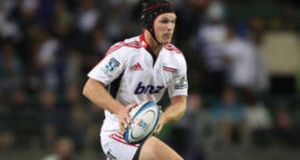 Munster have announced the signing of Canterbury and Crusaders pivot Tyler Bleyendaal on a three year contract. The 23-year-old will join the Irish province on November 1st.

Bleyendaal has made 19 Super Rugby appearances for the Crusaders and represented Canterbury in the ITM Cup on 39 occasions. A former New Zealand U20s player he captained the side to victory in the 2010 Junior World Championship in Argentina.

Despite the Dutch surname, Bleyendaal was born and raised in Christchurch. He started off playing soccer when he was younger but by the age of eight had switched to rugby.

His Crusaders debut came in 2012 against the Blues and saw him continue the remarkable record of Christchurch Boys’ High School old boys, such as Colin Slade, Stephen Brett, Aaron Mauger, Andrew Mehrtens and Dan Carter, who have started at number 10 for the Crusaders. He has scored 112 points in Super rugby for the Crusaders.

Speaking about his move to the province Bleyendaal said, “I am really excited to be heading to a new challenge of playing in a great competition in a new part of the world, for a world renowned team.

“The decision was not an easy one as my time with Canterbury and the Crusaders has been amazing, being involved with quality people every day has made the place special. From the research I have done I am sure that Munster will be very similar, a proud team with a great record.”

Munster Rugby CEO Garrett Fitzgerald admitted: “We are very fortunate to recruit the services of a talented young player such as Tyler Bleyendaal. We believe Tyler can play an important role in the future of Munster, and will further strengthen our squad. In his roles at 10 and 12 he has been a key decision maker with an intelligent understanding of the game, and will provide us with an exciting option in midfield.”

Bleyendaal, currently involved with the Crusaders, will join the province on completion of his commitments with Canterbury in the ITM Cup.